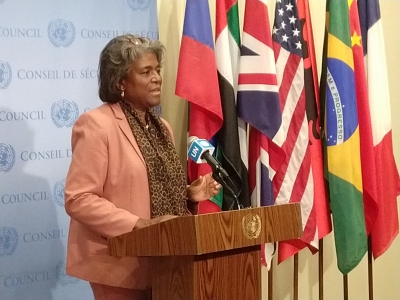 United Nations– Washington hopes that India will drop its restrictions on wheat exports after hearing at the United Nations (UN) Security Council from other countries about the looming food crisis, according to Linda Thomas-Greenfield, the US Permanent Representative to the UN.

“India will be one of the countries participating in our meeting at the Security Council, and we hope that they can, as they hear the concerns being raised by other countries, that they would reconsider that position,” the Cabinet official said on Monday previewing the US initiatives on food security in the wake of the Russian invasion of Ukraine.

Answering a reporter’s question about India restricting some wheat exports, she added, “We’re encouraging countries not to restrict exports because we think any restrictions on exports will exacerbate the food shortages.”

Russia and Ukraine accounted for nearly 30 per cent of the global wheat exports and the war has disrupted the supplies putting many countries at risk.

India, which is the world’s second-largest wheat grower and has a big stockpile, ordered an end to most purely commercial wheat transactions while leaving room for some exports to neighbouring countries and governments of countries in need.

The government notification of the revised policy on Friday said the exports were banned “in order to manage the overall food security of the country and support the needs of the neighbouring and other vulnerable countries”.

India’s Commerce Secretary, B.V.R. Subrahmanyam on Sunday said private companies would be allowed to meet previous commitments they have made for exports.

Explaining the restrictions, he added that New Delhi did not want an unregulated export of wheat that could lead to it getting “hoarded and is not used for the purpose which we are hoping it will be used for — which is serving the food requirements of vulnerable nations and vulnerable people”.

The main factor behind the reversal of Indian policy on wheat exports is the extreme heatwave that swept through some of the wheat-producing areas creating fears that the output could fall by as much as 5 per cent.

The US, which is the Security Council’s President for May, has urged for ‘Days of Action for Food Security’.

During those programmes, the US will be “identifying those countries who are willing and able to open up their own silos to fill that gap,” Thomas-Greenfield said.

On Wednesday, US Secretary of State, Antony Blinken is convening a global ministerial meeting of Foreign Ministers to address food security, nutrition and resilience, she added.

Blinken will also preside over an open debate in the Council on Conflict and Food Security on Thursday.

Thomas-Greenfield and UNICEF Executive Director, Cathy Russell will host a high-level event with leaders from the public and private sectors on how the Ukraine conflict is creating hunger crises for children.

“These Days of Action are about bringing this crisis to the centre of the world’s attention, and this is — this all takes on heightened significance given Russia’s brutal and unprovoked war in Ukraine,” Greenfield said. (IANS)