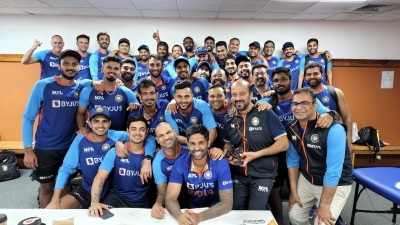 New Delhi– After India’s thumping 119-run victory (via DLS method) over West Indies in the third ODI in Port of Spain, Trinidad, the visitors gathered in the dressing room to celebrate and stand-in skipper Shikhar Dhawan led from the front there as well, asking the players to shout ‘who are we? champions!’.

The 36-year old Dhawan, who was named captain of India for three ODIs against West Indies as regular captain Rohit Sharma was rested and vice-captain KL Rahul was not fully fit, led the team to 3-0 whitewash in the Caribbean islands.

After the commendable victory in the third game, head coach Rahul Dravid lauded the youngsters to perform under pressure and shine in the absence of some of the big players who were rested from the ODI leg of this series.

“We came here with a young team. A lot of the guys who played in England didn’t play here. The way you guys played these three games, there were a couple of tight games, we’ve discussed those and to get on the right side of those tough games with some terrific performance under pressure was a really great sign for a young team,” Dravid said in a video posted by BCCI on Twitter.

Notably, the left-handed opener scored two crucial fifties at the top of the order and also used his resources well under his captaincy.

After Dravid’s speech, Dhawan, who was sitting beside Deepak Hooda, started his speech by congratulating the teammates and thanking the support staff.

“I would like to thank all the support staff and team members who have helped us. Well done boys the batting unit as well as the bowling unit. You guys were amazing and whatever we discussed before the series, we are a process-oriented team. You guys are young. You have already started taking big steps and I’m sure you are gonna go a long way,” he said.

However, it was the end of the video, which won hearts. Dhawan requested everyone including Rohit Sharma who has joined the squad for the T20I series to stand up, come close and shout ‘who are we? champions’ in unison.

“Before I end this talk, I want everyone to stand up, come close.. all of us… Come Rohit come…I will say ‘who are we?’ and we all will shout ‘champions’,” Dhawan said as the players and the support staff obliged.

India will next play a 5-match T20I series in the West Indies from July 29. Rohit Sharma will lead a squad, which will be without Virat Kohli, Jasprit Bumrah and KL Rahul. (IANS)