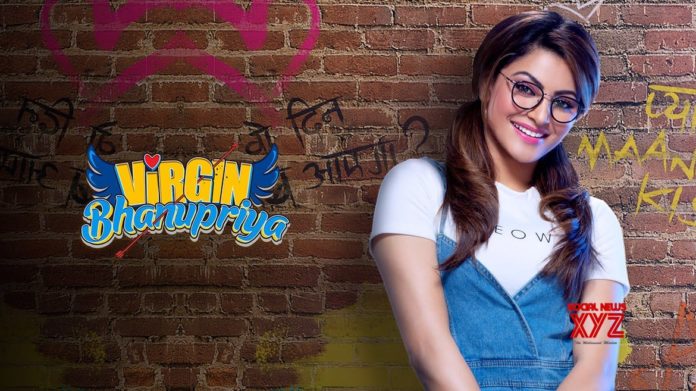 Geeky good girl in the dire need to lose virginity chases dashing bad boy to get the needful done. So, what happens next? If you are really dying to know, then that could be the sole urgency driving you to sit through Urvashi Rautela’s new starrer.

On paper, “Virgin Bhanupriya”, casting Urvashi in the title role, would quite simply seem like the most significant film in the actress’s not-so-significant career graph so far. Releasing the film digitally instead of waiting for the cineplexes to open was a smart move — Urvashi is a bigger social media sensation than she is a film star, after all.

Everything about Ajay Lohan’s debut as a feature film writer-director centres on Urvashi and the filmmaker has taken a calculated risk moving away from his lead star’s familiar sensuous image to cast her, in Bhanupriya’s own words, as an “urban city ki semi-urban girl”.

So, Urvashi as Bhanupriya — apart from that well-past-expiry name — gets the biggest, nerdiest pair of spectacles for a suitable look. Her wardrobe matches the ‘semi-urban girl’ profile, too (no itsy-bitsy slinky numbers that we are normally accustomed seeing Urvashi flaunt on screen — well, discount the mandatory disco naach-gaana).

Armed with that image makeover and propped by a script exclusively written for her, Urvashi as Bhanupriya sets off to explore her sexuality. Her trouble is she is in college and she is still a virgin. Forget sex, she is yet to kiss a boy. It doesn’t help matters that her best friend Rukul (Rumana Molla), self-defined “maneater”, is getting lots of action. Add to that the alarm bells — the astrologer blames it on luck and predicts she will remain a virgin all her life.

Bhanu, as friends and folks call her, finds a twist in her tale by way of Abhimanyu (Gautam Gulati) — nicknamed ‘Shartiya’ because he seems fixated about winning bets at any cost. She decides to give the hunk a shot.

Bhanu’s desperation to ‘lose it’ to Shartiya is meant to create scope for humour. However, most of the humour seems too imposed to be funny. As her story moves down a predictable track, a screenplay that started off looking like a comedy gradually starts accommodating melodrama.

The brief synopsis would give you an idea that the film is little more than a brainless slapstick. Writer-director Lohan must have realised as much, because he tries stuffing in some ‘relevance’ into his story with a token nod or two at solemn issues. The narrative dwells upon how sex continues to be a taboo topic even in today’s urban milieu, and the complexities of single motherhood. Yet, these subtexts seem shallow. They fail to add any extra dimension to the script.

Urvashi Rautela looks oddly cast as a college girl and struggles to convince as the girl next door who has never known some adventure. She manages to set up a buddy bonding equation of sorts with Rumana Molla’s Rukul. Gautam Gulati tries rehashing the filmi machoman from a zillion flicks as Bhanu’s ‘hero’, while veterans Rajiv Gupta and Archana Puran Singh as her separated parents are strictly adequate. Most of the actors are done in by inept writing.

“Virgin Bhanupriya” tries to be a different sort of entertainer, and that is the problem. There isn’t enough imagination in this script to spell any sort of a difference. You would think the film would have still worked had writer-director Lohan and team stuck to being brainless, but even there the film runs out of gags soon enough. (IANS)