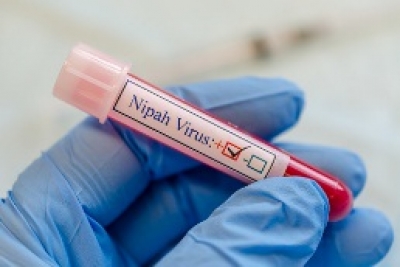 New York– Scientists at the University of Texas have developed a vaccine that could protect against the deadly Nipah virus in just three days.

Nipah is a zoonotic virus (transmitted from animals to humans), which can be spread through contaminated food or directly between humans on exposure to secretions. The virus had three outbreaks in India in the last four years, and has so far claimed nearly 20 lives, including a 12-year-old boy from Kerala.

Much like Covid, infection from Nipah virus spreads through respiratory droplets. But it is far more lethal, killing up to three-quarters of people it infects. It has also been listed as one of the viruses most likely to cause the next pandemic by the World Health Organisation (WHO).

The US scientists immunised African green monkeys with the experimental jab about three to seven days prior to exposure to a strain of the Nipah virus.

The results, published in the journal Proceedings of the National Academy of Sciences (PNAS), showed all vaccinated monkeys were protected from lethal disease, while 67 per cent of animals vaccinated three days before virus exposure got partial protection but survived.

The experimental jab is found to be “a safe, immunogenic, and effective at protecting the monkeys from a high dose of Nipah virus given shortly after vaccination”, Thomas W. Geisbert, Department of Microbiology and Immunology, at the varsity’s Medical Branch, wrote in the paper.

“These studies are an encouraging first step in showing the safety and potential efficacy of this vaccine in an outbreak scenario. Future studies are needed to identify the minimum dose needed for efficacy, as well as to define the durability of vaccine-induced immune responses,” he added.

There is currently no vaccine approved for humans. While several preventive vaccines have shown promise in protecting animals against lethal Nipah virus disease, most studies have assessed protection one month after vaccination.

But, “in order to contain and control outbreaks, vaccines that can rapidly confer protection in days rather than months are needed”, Geisbert said.

Currently at least eight are currently being tested on animals, including one made by Oxford University, Daily Mail reported.

The new jab uses a virus from the same family as rabies that has been modified so it cannot cause symptoms. It acts as a vehicle to deliver the harmless protein to the cells.

Once inside, the cells display the protein on their surface, and the immune system recognises that it doesn’t belong there. This triggers an immune response in which antibodies and T-cells are released. The body then keeps a memory of this process so it knows how to deal with the real Nipah virus in the future, the report said.

So far, the “fruit bat” has only been identified as the animal host reservoir from which the Nipah virus can spread the disease to other animals like pigs, dogs, cats, and goats.

Outbreaks of the Nipah virus are rare, with only around 700 cases reported since the virus was first discovered in Malaysia in 1999.

Yet, Nipah virus is seen as “a public health concern because it infects a wide range of animals and causes severe disease and death in people”, according to the WHO.