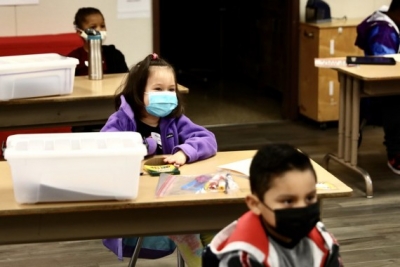 Washington– Over 7.5 million children have tested positive for Covid-19 since the onset of the pandemic in the US, representing 1 in 10 American children, according to the latest report of the American Academy of Pediatrics (AAP) and the Children’s Hospital Association.

A total of 7,565,416 child Covid-19 cases had been reported across the country as of December 23, and children represented 17.4 per cent of all confirmed cases, according to the report published on Monday.

The overall rate was 10,052 cases per 100,000 children in the population, Xinhua news agency reported.

Covid-19 cases among US children are “extremely high and increasing,” according to the report.

Since the first week of September, there have been over 2.5 million additional child cases, according to the AAP.

Children accounted for 1.8 to 4.1 percent of total reported hospitalisations, and 0 to 0.27 per cent of all Covid-19 deaths, said the report.

“At this time, it appears that severe illness due to Covid-19 is uncommon among children.

However, there is an urgent need to collect more data to assess the severity of illness related to new variants as well as the longer-term impacts of the pandemic on children, including ways the virus may harm the long-term physical health of infected children, as well as its emotional and mental health effects,” the AAP added in the report. (IANS)