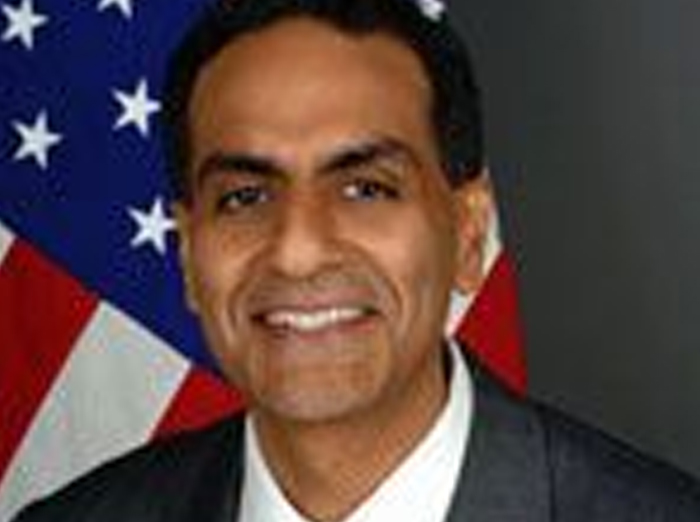 New Delhi– India is the only country that the US is supporting as a emerging global defence leader, US Ambassador Richard Verma, who is of Indian-origin, said on Monday.

“We are engaged in cooperation here in India that is not only unprecedented for this relationship but is qualitatively different than those we share with any other country in the region, or the world,” Verma said while delivering a lecture on “Indo-US strategic partnership: Present status and future trends” organised by the Indian Association of Foreign Affairs Correpondents (IAFAC).

“Here in India we are focused on helping Indian forces develop the capabilities and platforms that will allow them to fulfill India’s stated goal of becoming a leading power in the region and beyond,” he said.

Stating that for the US, this partnership was unique, Verma said: “There is no other country in the world that we are supporting as an emerging global defence leader. We have overhauled our approach to defense licensing to India with a presumption of approval for the vast majority of even the most sensitive platforms.”

According to the ambassador, who is one of only three Indian-origin envoys posted in New Delhi, the US’s offers to provide Indian forces with Apache attack helicopters – the most advanced helicopter in the US inventory – Chinook heavy-lift helicopters and M777 howitzers are akin to Washington’s defence relationships with its closest NATO allies.

“Never in our history have we actively supported the indigenous development of an aircraft carrier program in another country. Yet, we are doing so today – the joint Aircraft Carrier Technology Working Group met here in India this past week,” he said.

“In the future, I am sure we will soon see US and Indian aircraft carriers operating side-by-side in the region and beyond to maintain the freedom of the seas for all nations.”

Verma said the US was also eager to partner with India on solutions to its pressing need for modern fighter aircraft.

“We are also mindful that India does not simply want to purchase fighters but intends to establish a production line here in India that will provide for the maintenance and supply of its air force. I am hopeful that US companies and technology will play a central role in an arrangement that would see US-designed fighters built here in India in response to India’s requirements,” he stated.

According to the ambassador, India’s leadership is crucial to the Asia-Pacific region.

“There is no place where India’s leadership is needed more sorely that in the Asia-Pacific region,” he said, adding that the region was experiencing change at a furious pace with the emergence of new democracies, territorial disputes, the effects of climate change and profound questions over the governance of the commons.

Verma stated that American diplomacy in the region demonstrated that “we are here to stay in our efforts to preserve and enhance a stable and diversified security order in which countries pursue their national objectives peacefully and in accordance with international law and shared norms and principles”.

Stating that India the US could not do this alone, he said: “We look to India to continue to move beyond its historical reservations to seize this moment, to reassert its leadership role in the region in our shared efforts to promote the peaceful resolution of disputes, an open economic order, and a liberal political order that promotes peace and human dignity, based on human rights and the rule of law”.

According to Verma, it is critical for India to take its rightful place on the world stage.

“It is an absolute necessity that the world’s largest democracy, and one day soon the world’s most populous country, make its voice heard in the international issues in this increasingly complicated and interconnected 21st century,” he said.

According to the ambassador, the US was committed to ensuring that India not only has a seat at the table, but that it also has the political stature to act as a global leader, through Washington’s support for India’s role in a reformed UN Security Council and interest in joining Asia-Pacific Economic Cooperation (APEC).

As for the future of the India-US relationship, he said that the threat of international terror remains a defining challenge for both our countries.

He said the US’s counter-terrorism partnership with India will remain a central tenant of the cooperation between the two countries, “sharing sophisticated intelligence, collectively training our special operators in more advanced joint exercises, and ensuring we are both working together to counter the messages of violent extremists”.

“Improving economic security is also something we can tackle together,” Verma stated.