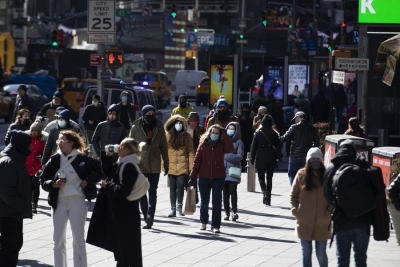 New York– The US Centers for Disease Control and Prevention (CDC) has eased mask recommendations for the bulk of the country under a new framework that immediately affects nearly 70 per cent of Americans.

“The new guidelines, which took effect from Friday, reflect the administration’s view that the US has entered a different, potentially less dangerous phase of the pandemic,” reported The Washington Post.

The new guidelines suggest that 70 per cent of Americans can now stop wearing masks, and no longer need to keep social distance or avoid crowded indoor spaces. The change follows a relaxation of restrictions by most governors responding to nosediving case counts and public pressure, Xinhua news agency reported.

“The shift reflects the reality that after more than two years of living with the virus, most communities have greater protection against severe disease because of widespread immunity gained from both vaccinations and infections, as well as the increased availability of treatments, testing and higher-quality masks,” said the report.

Under the new framework, counties are guided to determine the need for restrictions after assessing three factors — new Covid-19-related hospital admissions over the previous week and the percentage of hospital beds occupied by Covid-19 patients, as well as new cases per 100,000 people over the previous week.

Based on these factors, counties can calculate whether the risk to their residents is low, medium or high. According to the CDC, only areas of high risk should require everyone to wear a mask, but unvaccinated people should wear masks even in low-risk areas.

Meanwhile, Americans will still be required to wear face coverings on public transportation, including buses, trains and planes, until a decision is made around March 18 when the order is set to expire.

“The new guidelines are being released as the coronavirus is in retreat across the country,” reported The New York Times.

“We’re well past the surge,” Linsey Marr, an aerosol scientist at Virginia Tech, was quoted as saying.

“We don’t need to be operating in emergency mode anymore.”

Most states have eased rules for mask-wearing, and some like New Jersey have announced plans to lift mandates even in schools, and others are poised to end indoor mask mandates in the coming weeks.

Under the CDC’s previous criteria, 95 per cent of the counties in the US were considered high risk, whereas under the new criteria, fewer than 30 per cent of Americans are living in areas with a high level of risk.

“An official recommendation from the CDC may hold some sway in districts that have been more cautious,” said the report. (IANS)