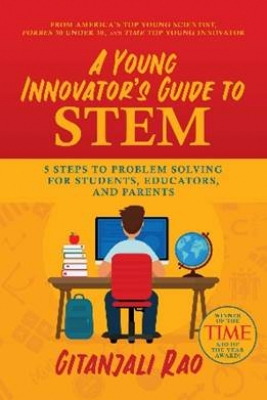 New Delhi– Our generation is growing up in a time where we are seeing problems that have never existed before. Older tools and techniques don’t necessarily work anymore to solve such issues. We need a different approach that builds on the latest developments in science and takes an alternate path to innovation. Now more than ever, it’s time to come together to make a difference in society. But how exactly do we make that change?

Gitanjali Rao, TIME magazine’s 2020 ‘Kid Of The Year’, innovator and America’s Top Young Scientist, brings to you an interactive experience to help immerse students in the process of innovation in “A Young Innovator’s Guide to STEM: 5 Steps to Problem Solving for Students, Educators, and Parents”(Simon & Schuster).

Recognised by ABC, NBC, CBS, NPR, The Tonight Show with Jimmy Fallon, and Marvel’s Hero Project, the accomplished author builds on her experiences and provides a prescriptive step-by-step process for identifying problems and developing solutions – her book striving to impact students, teachers, and educators to adapt to a new learning style, one that can have a positive impact on society.

What do you say? Let’s come together and create an innovation movement!

She was honoured as Forbes “30 Under 30 in Science” in 2019 and TIME’s “Top Young Innovator” for her innovations and STEM workshops she conducts globally, which has inspired thirty thousand students in the last two years across three continents. In her sessions, she shares her own process of innovation that can be used by students all over the world. She is an experienced TED speaker and often presents in global and corporate forums on innovation and the importance of STEM.

“Gitanjali Rao is an inspiring innovator and motivational speaker about her experiences as America’s Top Young Scientist. In her book, she provides an infrastructure to help students, teachers, and parents solve real-world problems in a way that can lead to real change. As a former educator, district leader, and STEM thought leader, I highly recommend this book to anyone interested in becoming an innovator to make the world a better place,” says, Dr. Cindy Moss, VP, Global STEM, Discovery Education. (IANS)