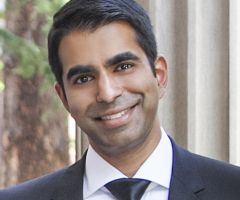 BOSTON–Although more than five decades have passed since the Civil Rights Act of 1964 was enacted, income inequity remains. Black workers in the U.S. continue to earn less than white workers. And according to a new study by researchers at Harvard Medical School and the University of Southern California, this inequity also holds true for black and white male physicians, despite the fact that they have the same high levels of education and do the same work.

The study also found that while black and white women in general earned similar pay, income disparities are even greater for female physicians of either race, who earn considerably less compared with males of either race.

The findings, published June 8 in The BMJ, showed that, between 2000 and 2013, the median income for white male physicians was 35 percent greater than that for black male physicians.

“We found that the inequities in pay for physicians mirror disparities in the overall U.S. economy,” said Anupam Jena, senior author of the study and the Ruth L. Newhouse Associate Professor of Health Care Policy and Medicine at HMS, and a physician at Massachusetts General Hospital. “Unfortunately, this means that medicine has not been spared the disparities by race and sex that plague the rest of the U.S. labor market.”

The authors noted that the pay gap is not explained by any of the many factors that are known to influence doctors’ income, such as specialty, number of hours worked, geographical region or number of years in practice.

The authors used two nationally representative surveys of physicians to reach their conclusions.

The larger of the surveys covered the years 2000 through 2013 and included annual income information for more than 60,000 black and white doctors, both male and female, along with information about age, number of hours worked, and the state in which the doctor practiced. A smaller but more detailed national survey was used to corroborate the findings. This smaller survey included nearly 18,000 physicians and covered the years 2000 through 2008. It provided additional information that allowed the researchers to adjust for specialty, number of years in practice, number of hours worked, practice type, and other factors known to influence doctor income.

Both surveys showed the same disparities.

“Our findings are not only disconcerting for black male doctors but also highlight the lower incomes of female doctors relative to their male peers,” said Dan Ly, a doctoral student at Harvard University and a physician and HMS lecturer on medicine at the VA Boston Healthcare System. Other study authors included Seth Seabury, an associate professor at the Keck School of Medicine and the Leonard D. Schaeffer Center for Health Policy and Economics at the University of Southern California.

Race-linked differences in income have often been attributed to differences in education, labor market attachment, and employer discrimination. Given that doctors are uniformly highly educated—and that the study adjusted for several factors known to influence doctor income—the researchers were struck by the findings, especially the breadth of the income disparity between black and white male doctors. Other factors to consider in further research are whether black male doctors have less bargaining power in salary negotiations, face employer discrimination or have lower clinical revenue due to differences in patient volume, billing or services provided.

“These findings are deeply concerning,” Jena said. “If the goal is to achieve equity or to give incentives for the best students to enter medicine, we need to work on closing both the black-white gap and the gender gap in physician incomes.”