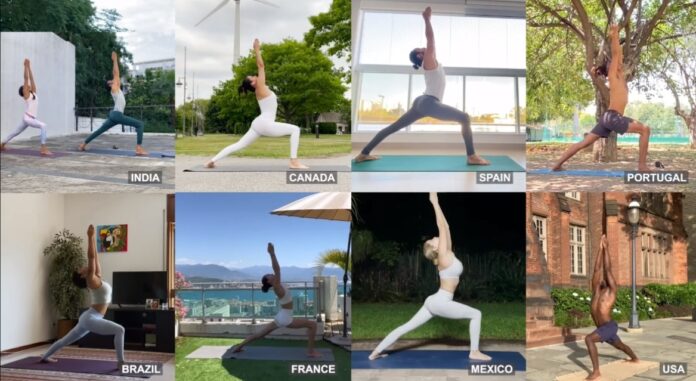 United Nations– Yoga, which provided a ‘lifeline’ during the Covid-19 pandemic, can help the world recover from its ravages, leaders at the United Nations said on Monday on the occasion of the 7th International Day of Yoga.

“As we take steps to recover from the pandemic, let yoga inspire us to approach challenges holistically, to work together through the multilateral system so we recover better, stronger and greener,” UN General Assembly President Volkan Bozkir said.

“The social and economic consequences (of the pandemic) have been devastating for many around the world (and) yoga was a lifeline during the lockdown. It helped maintain physical well-being while also managing the stress of uncertainty and isolation,” he said.

Because of the pandemic, the Yoga Day was observed virtually at the UN this year — just like last year — without the mass exercises with the participation of top UN officials and diplomats from around the world that became a part of the UN tradition since 2015.

Deputy Secretary-General Amina Mohammed said that yoga can “play a significant role in the care and rehabilitation of COVID-19 patients in allaying fears and sorrow.”

“The Covid-19 pandemic has caused enormous stress and anxiety to many people worldwide, who are stemming from loss, isolation, economic insecurity or disruption to normal routines and work-life balance. Yoga can help us cope with the uncertainty and anxiety,” she said.

India’s Permanent Representative to the UN, T.S. Tirumurti, said the Yoga Day this year “seeks to reaffirm the rejuvenating role of yoga in promoting health and wellbeing of the global community which is presently coping with the pervasive effects of the Covid-19 pandemic.”

“Yoga organisations and practitioners around the world have been raising awareness through digital platforms about the potential of yoga in mitigating the adverse effects of the pandemic on the physical and mental well-being of the people,” he said.

The United Nations General Assembly had declared June 21 as the International Day of Yoga in 2014 at the initiative of India with the support of 177 countries.

Unlike the UN, which still maintains strict Covid-19 precautions, the host city New York had dropped most Covid related restrictions last week as the city’s vaccination rate surged to about 70 per cent, enabling a mass celebration.

On Sunday, the city’s Times Square held its first major event after the restrictions fell off, celebrating Yoga Day to coincide with the Summer Solstice, which came a day earlier this year.

A relay of yoga practice with over 3,000 people participating took place at Times Square, which is known as the ‘Crossroads of the World’, from 7:30 am to 8 pm.

Across the Hudson River at Jersey City’s Liberty State Park against the backdrop of the Statue of Liberty, the tristate Federation of Indian Associations organised a celebration on Sunday.

Both the events were organised in partnership with the Consulate General of India. (IANS)