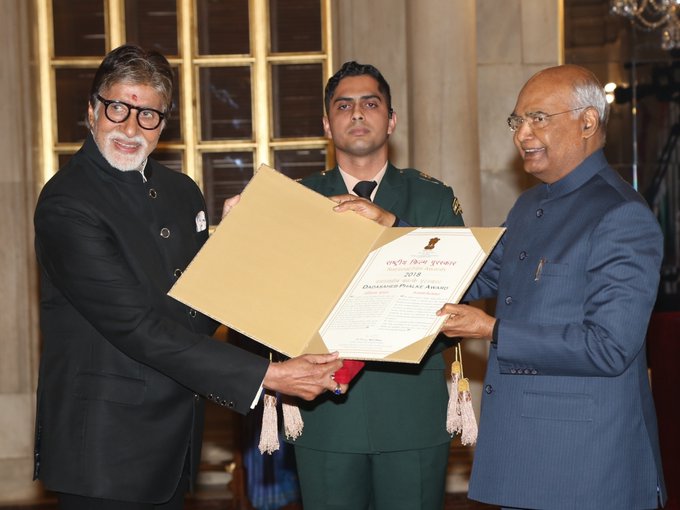 Soon after the award ceremony at the Rashtrapati Bhavan here, #dadasahebphalkeaward trended with 3,315 tweets and #AmitabhBachchan with 2,101 tweets.

Union Minister for Information & Broadcasting Prakash Javadekar wrote: “The legend
Amitabh Bachchan, who has entertained and inspired for two generations, was selected unanimously for the #DadaSahabPhalke award. The entire country and the international community is happy. My heartiest congratulations to him. @narendramodi @SrBachchan.”

The writer of ‘Pink- The Inside Story’, Gautam Chintamani tweeted: “Fate ordains #AmitabhBachchan to be honoured with the Phalke Award on the birthday of #RajeshKhanna, a co-star who brought out the best in him.”

A senior scribe shared how Khanna often smiled looking at a particular ‘Lifetime Achievement’ award as it was presented by Bachchan.

One user posted: “Congratulations to the actor of the century #AmitabhBachchan for receiving the most prestigious #DadasahebPhalke Award. You have created many milestones in acting & performance.”

Another user tweeted: “Heartiest congratulations to Bollywood’s legendary actor. #AmitabhBachchan is one of the greatest actors in the world.”

Amitabh Bachchan was honoured as he has completed 50 years in the Indian film industry.

The official Twitter handle of the Press Information Bureau (PIB) shared a video of Big B receiving the award amid loud applause. He attended the ceremony with his wife and actress Jaya Bachchan and son and actor Abhishek Bachchan. (IANS)