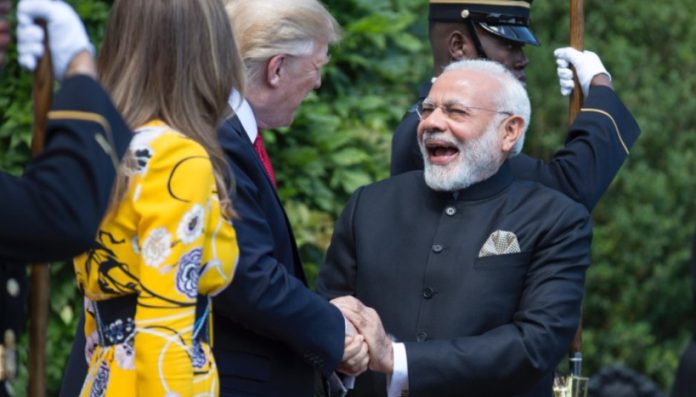 Gandhinagar–The theme of Donald Trump-Narendra Modi roadshow has been named ‘Unity in Diversity’, which will depict the cultural diversity of India.

Trump’s official visit will begin at 12.30 p.m. when he will land at the Ahmedabad airport. After inspecting the guard of honour by the three services at the airport, Trump will join Modi in the roadshow at 1 p.m.

They will arrive at the world’s biggest cricket stadium at 2.20 p.m, after spending time at the Gandhi Ashram in Sabarmati.

After the ‘Namaste Trump’ event, the Trump couple will arrive at the Ahmedabad airport at 3.10 p.m. to leave for Agra. After seeing them off, the Prime Minister will leave for Delhi.

Inclusion of visit to the Taj Mahal in the US President’s itinerary caused rescheduling of several programmes.

A high-level business delegation will also be accompanying Trump.

“It’s an honour for us that the US President is beginning his two-day visit at Ahmedabad. When both the country’s security services are taking care of the security arrangements, as the state government, we are providing all the support and cooperation to all the arrangements,” said Nitin Patel, Deputy Chief Minister of Gujarat. (IANS)