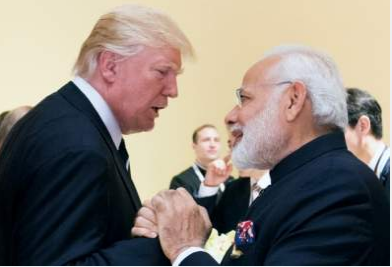 Washington–President Donald Trump blindsided India in his mercurial style by stepping into the Kashmir quagmire with a claim on Monday that Prime Minister Narendra Modi had asked him to mediate the dispute with Pakistan.

India immediately rejected Trump’s assertion. “No such request has been made by Prime Minister Narendra Modi to the US President,” External Affairs Ministry spokesperson Raveesh Kumar said in a tweet.

In his euphoria with Pakistan Prime Minister Imran Khan offering to help resolve the Afghanistan war, Trump positioned himself as a mediator in the Kashmir dispute.

Speaking to reporters before his meeting in the White House with Khan, Trump asserted that during his meeting with Modi in Osaka, “We talked about the subject, (and) he actually said, ‘Would you like to mediate, mediate or arbitrate?’ I said, ‘Where,?’ (and he said) ‘Kashmir’.

Trump made the claim about Modi while answering a question from a reporter about what he would do to help resolve the Kashmir issue.

Any request for mediation would be a major change in India’s policy of not having third party involvement in the Kashmir issue, which India sees as a bilateral matter with Pakistan.

The claim — regardless of the credibility issue — will also roil India’s politics because it would appear to be a departure from long-standing bilateral policy and India’s consistent rejection of mediation or facilitation offers from several international leaders, including UN Secretaries-General.

Trump has a credibility issue and is known for making off the cuff remarks and exaggerated claims.

Trump’s claim of arbitration goes beyond mediation, potentially giving him the authority to make an award.

Denying that Modi had made a mediation request to Trump, Kumar said: “It has been India’s consistent position that all outstanding issues with Pakistan are discussed only bilaterally. Any engagement with Pakistan would require an end to cross-border terrorism. The Simla Agreement and the Lahore Declaration provide the basis to resolve all issues between India and Pakistan bilaterally.”

Despite previously taking a stand against Islamabad-backed terrorism, Trump put himself in a neutral position equating India and Pakistan,

When Trump said, “If you want me to mediate or arbitrate, I will be glad to do it”, Khan immediately said, “Yes, Mr President,” and added that he will have the prayers of millions if he accomplished it.

Trump said that he was surprised at how long the Kashmir problem has been dragging on.

Imran Khan interjected at this point to say the Kashmir problem has been going on for 70 years.

“It’s impossible to believe that two incredible countries that are very, very smart, with very smart leadership, can’t solve a problem like that. But if you would want me to mediate, or arbitrate, I would be willing to do that,” the US President said.

Khan then added: “I would like to tell you that right now you will have the prayers of over a billion people if you can mediate and resolve this issue.”

To which Trump nodded and said, “It should be resolved. But he (Modi) asked me the same thing. So I think there is something. So, maybe we’ll speak to him, or I’ll speak to him and we’ll see if we can do something.”

“Because I have heard so much about Kashmir. Such a beautiful name, it’s supposed to be such a beautiful part of the world. But right now, there’s just bombs all over the place. So everywhere you go, there are bombs.. And it’s a terrible situation, been going on for many years. If I can do anything to help, let me know,” Trump said.

“I think they would like to see it resolved. And if I can help I would love to be the mediator,” he added.

Trump was effusive about Pakistan’s possible help in ending the Afghanistan War. “Pakistan’s going to help us out to extricate ourselves (from Afghanistan)”, he said.

He said that earlier Pakistan had failed to help the US, but ascribed it to failures of previous US and Pakistani leaderships.

On the issue of US payments to Pakistan, an issue of importance to Islamabad that is facing an economic crisis, Trump appeared positive.

“We paid $1.3 billion to Pakistan in aid for many years. The problem was Pakistan was not doing anything for us. They were subversive.”

After he ended the aid about a year ago, he said, “to be honest, I think we have a better relationship with Pakistan right now than when we were paying that money. That money can come back”. (IANS)