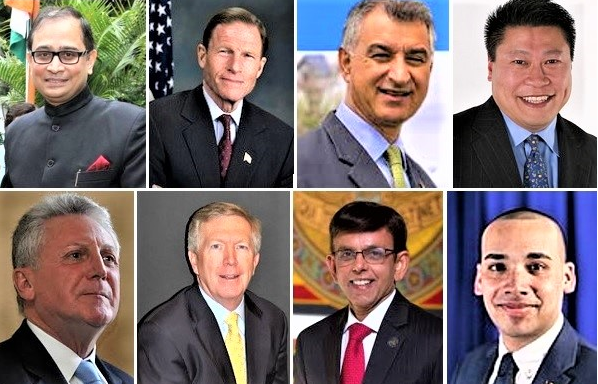 STAMFORD, Conn.–The Global Organization of People of Indian Origin (GOPIO)-Connecticut chapter will honor outstanding achievers of the Indian American community in Connecticut and those provide service to the community or the society at large at its Annual Awards Banquet on Saturday, July 27th at the Stamford Marriott Hotel, Stamford, CT starting at 6 p.m.

Six Indian Americans are honored for their achievements in profession and service to the nation.

Community advocate and former Congressional advisor Raghib Allie-Brennan is the State Representative of Connecticut’s 2nd Assembly District which includes the towns of Bethel, Danbury, Redding, and Newtown. His father immigrated to Queens, NY from Guyana and Raghib was raised in Bethel. As a former Congressional adviser in the U.S. House of Representatives, Mr. Allie-Brennan developed policy knowledge on energy and environmental issues, emergency response, foreign policy and civil rights. He had drafted environmental protection legislation that received bipartisan support, served as a lead staffer in efforts to secure Low Income Home Energy Assistance Program (LIHEAP) funding, and has testified before the U.S. Commission on Civil Rights regarding environmental justice issue. Raghib graduated from Marymount Manhattan College with a Bachelor’s in International Studies.

Dr. Dhar is George Rogers Clark Professor of Management and Marketing, Yale School of Management; Professor of Psychology in the Department of Psychology, Yale University; Director, Center for Customer Insights. Professor Dhar has been involved in pioneering work in understanding the different factors that influence how consumers think and decide. Ravi has published more than 70 articles and serves on the editorial boards of several of the leading marketing journals. A consultant to dozens of Fortune 100 companies, the American Marketing Association has ranked Professor Dhar as the second most productive scholar publishing in premier journals from 2009 to 2016. His research and teaching has been honored with various awards including the Distinguished Scientific Contribution Award of the Society for Consumer Psychology, the Distinguished Alumnus Award from the Indian Institute of Management, and the Yale School of Management Alumni Association Teaching Award.

Dr. Motupally is Chief Operating Officer (COO), Doosan Fuel Cell America reporting to the Chief Executive Officer and handles Research and Engineering, Manufacturing, Operations, Service and Installation, striving for seamless integration across the organization to deliver world-class clean energy solutions to customers. Dr. Motupally has over 17 years of experience in multiple Fortune 50 companies. Prior to Doosan, Dr. Motupally was Head of R&D at UTC Power, a division of United Technologies Corporation and at the Gillette Company. Dr. Motupally has a Ph.D. in Chemical Engineering from the University of South Carolina and DuPont Central R&D and an MBA from Carnegie Mellon University. Dr. Motupally has authored over 50 papers and patents in the areas of materials, electrochemical engineering and mathematical modeling. He and his team have won numerous international awards for their ground-breaking work in commercializing fuel cells and has been recognized with many awards.

Dr. Nagaraj is Principal Research Fellow at Cytec Solvay. He started his career at American Cyanamid in 1979 after his doctorate from Columbia University, and held various positions in Cyanamid/Cytec over the years, but never far from science, research, and education which are his passions. Nag has degrees in both chemistry and metallurgy. He has over 100 journal publications and over 30 patents. Nag has been a part-time educator throughout his career. He is an Adjunct professor at Columbia University, and was a visiting professor for 5 years at JKMRC of University of Queensland, Brisbane. Nag was elected into the National Academy of Engineering in 2006 and inducted into the International Mining Technology Hall of Fame in 2016. Nag is a Distinguished Member of SME.

Dr. Shah is a Board Certified Infectious Diseases specialist and has been with Stamford Hospital and the Medical Group for 7 years. She did her Internal Medicine training at the University of Pennsylvania followed by an Infectious Diseases fellowship at Columbia University Medical Center. She received her Masters of Epidemiology at Columbia University Mailman School of Health. She is currently the Associate Hospital Epidemiologist and Associate Director of Infectious Diseases at Stamford Hospital. She has been a member of the Alpha Omega Alpha Medical Honor Society since 2007 and received the Rookie of the Year Award from the Stamford Hospital Department of Internal Medicine during her first year as an attending.  She has been a co-author for a few invited poster presentations at national medical conferences on topics ranging from HIV prevention, C. dificile reduction, and Aspergillosis. She is an active member on numerous committees in the hospital and is also involved in teaching the medical house staff.

Dinyar is Principal of Wadia Associates, an architectural firm in New Canaan, CT. Dinyar developed his love of architecture and unerring eye for distinction as a child growing up in Bombay (Mumbai) with the infrastructure of magnificent public buildings erected by the British during their colonization of India. After a bachelor’s degree at the MS University of Baroda, Dinyar and his wife Gool came to the US in 1968 and Dinyar enrolled for a graduate degree at the School of Architecture, Columbia University. After graduating as a William Kinney Fellow, he then went to work for one of his professors, Victor Christ-Janer, at his architectural firm in New Canaan, CT, beginning his career in the modern vernacular. However, Dinyar found himself drawn to the beauty and charm of the traditional buildings in New Canaan and the surrounding towns of Fairfield County. Determined to heed his passion, he decided to strike out on his own in 1975 to design traditionally inspired homes. Over the past 30 years, he has demonstrated a remarkable versatility and adaptability that has solidified his position as the areas’ leading classical architect. With holistic approach to design. Dinyar has been recognized with numerous architectural and landscape.

Commenting on the award selection, GOPIO-CT President Anita Bhat said, “We select the awardees, who have made an impact in our society and/or those who provide outstanding service.”

GOPIO International Founder President Dr. Thomas Abraham and Chairman of GOPIO-CT Awards Committee said, “these awardees are role models for our new generations and GOPIO-CT has a done great job in building up a good image of India and Indian Americans in Connecticut.”

The awardees will be honored at GOPIO-CT’s 13th Annual Awards Banquet on Saturday, July 27th at the Stamford Marriott Hotel in Stamford. CT. The program includes dignitaries, entertainment and Bollywood DJ. For reservation or to buy tickets, call Anita Bhat 203-524-2935 or send an e-mail to abnewyork71@gmail.com.

Over the last 13 years, GOPIO-CT, a chapter of GOPIO International has become an active and dynamic organization hosting interactive sessions with policy makers and academicians, community events, youth mentoring and networking workshops, and working with other area organizations to help create a better future. GOPIO-CT serves as a non-partisan, secular, civic and community service organization – promoting awareness of Indian culture, customs and contributions of PIOs through community programs, forums, events and youth activities. It seeks to strengthen partnerships and create an ongoing dialogue with local communities.