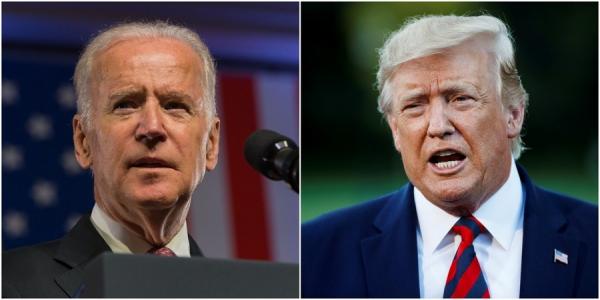 New York– US President Donald Trump and his challenger Joe Biden will face-off on Thursday night for the final debate with a microphone muzzle setup to cut off interruptions, which has been criticised by Trump as “unfair”.

The debate, 12 days before the November 3 presidential elections with the Democratic candidate ahead in the polls, will focus entirely on domestic issues, save for national security which could touch on international issues but not directly deal with it.

Trump’s constant interruptions during the debate last month led the Commission on Presidential Debates to announce that the microphones of the person who does not have the floor will be muted.

At one point during the last debate, an exasperated Biden told Trump, “Would you shut up, man.”

“I think the mute is very unfair,” Trump said on Wednesday, adding, “But that’s my life.”

The microphone cut off will crimp the style of Trump, whose reach to his basis is displaying an aggressive stance.

The debate will have six segments with two-minute opening statements by Trump and Biden during which the microphone of the other would be muted to prevent interruptions.

The debate scheduled to take place in Nashville, Tennessee, at 8 p.m. local time (Friday 6:30 a.m. IST) will be moderated by Kirsten Welker, the NBC network’s White House correspondent, who is known for adversarial questioning.

Trump said, “She’s no good”, because “she has been screaming questions at me for a long time”.

Going into the debate, Biden has a 7.7 per cent lead over Trump, according to the aggregation of polls by ReaclClearPolitics, down from 9.4 per cent last week.

According to the US Elections Project, 45 million Americans have already voted either by mail or at the early polling sites and they won’t be influenced by the debate.

Thursday’s debate would have been the third one, but the second debate that was scheduled for October 15 was cancelled because Trump refused to participate in it after the debate commission said it would be held virtually as a health precaution following Trump’s hospitalisation for Covid-19.

Instead, the two candidates held separate nationally televised town hall meetings in which the citizens asked them questions.

It was expected that Thursday’s debate would have had a foreign policy segment, which was not ther in the first debate either, but the organisers decided to drop it and instead start off with Covid-19, which is the issue on which the Democrats have been hammering Trump.

Trump’s campaign manager Bill Stepien complained in a letter to the debate commission that it was biased against his candidate by dropping foreign policy from the face-off.

“The Commission’s pro-Biden antics have turned the entire debate season into a fiasco,” he wrote.

The Trump campaign considers Biden vulnerable on foreign policy matters because he had headed the Senate Foreign Relations Committee before his vice-presidential stint and had advocated the disastrous invasion of Iraq based on the false claim that its leader Saddam Hussain had weapons of mass destruction.

The debate also does not have a specific segment on the economy, which Trump considers his strong point because of its pre-coronavirus performance.

Trump will be vulnerable during the debate on the topics of race relations, climate change and leadership. (IANS)