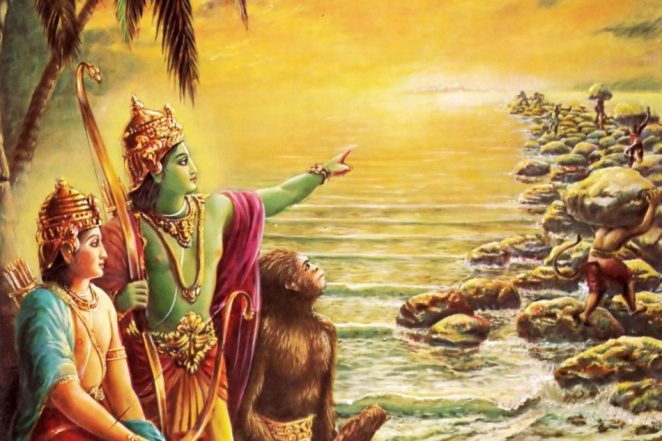 Jaipur–An 83-year-old hotelier, Ashok Kumar, running a prominent hotel chain in Rajasthan and many educational institutes in Haryana, UP and Punjab, has used the lean period of lockdown to find out the itinerary of Lord Ram during his exile period in the atlas of present times.

Speaking to IANS, he said, “We have found 195 places which still have the memorials connected to the events narrated in the Ramayana which directly relate to the life of Ram and Sita. These include Tamsa Tal (Mandah in UP), Shringverpur (Singraur in UP), Bhardwaj Ashram (located near Allahabad), Atri Ashram, Markandaya Ashram (Markundi in UP), Chitrakoot, Pamakuti (on banks of the Godavari), Panchvati, Sita Sarovar, Ram Kund in Triambakeshwar near Nasik, Shabari Ashram, Kishkindha (village Annagorai in Karnataka), Dhanushkoti and Rameshwar temple (in Tamil Nadu) and many others.

“Today, when people watch the Ramayana serial which is smashing many TRP records, they often ask if it is a myth or a reality that Ram went for Vanvaas for 14 years”, says Kumar.

“His travel itinerary is clearly seen on today’s atlas. Lord Ram started from Ayodhya (still exists) to Janakpur (Nepal), returned through Bihar to go south via Chhattisgarh (Bastar region), Andhra Pradesh, Karnataka and finally through Tamil Nadu, reached a non-descript place where he established a Shiva-lingam which was finally called as Rameshwaram. Nearby was the stone-bridge he created to walk up to Jaffna region in today’s Sri Lanka,” says Kumar.

In Ramayan, it is mentioned that Ram’s army constructed a bridge over the sea between Rameshwaram and Lanka. After crossing this bridge, Ram’s army defeated the demon king Ravana.

Recently, NASA had put out pictures on the Internet of a bridge, the ruins of which are lying submerged in Palk Strait between Rameshwaram and Sri Lanka, he says.

“The Ashok Vatika or Sita Vatika exists in Sri Lanka even today and has been maintained as a popular tourist destination. It is over the highest hills in south of that country. They call it Sita Eliya. One has to first go to Lanka’s hill station named as Nuwara Eliya. From there, people drive further up and reach Sita Eliya,” says Kumar.

So Sri Lanka has maintained Sita’s place “even 7,078 years after a historical incident” when Ram had to fight against Ravana to bring back his wife, Sita who was abducted by Ravana, Kumar says, adding that he followed Tulsidas Ramayan to track his itinerary.

He says the geography has naturally undergone a change over so many centuries. So to revive the same grandeur may be out of question. “But something may always be better than nothing”, he says.

Running many prominent educational institutions in Uttar Pradesh, Haryana and Punjab, he has also asked a few professors to conduct a research on Ramayana, Mahabharat and Chanakya period to evaluate what kind of world existed in those years and how those times were different from today’s.

“We are trying to bring out four maps of the four different periods to know how the world has changed,” he says.

“I am also conducting a research on the period somewhere around 1200 years ago before the Mughal invasion of India”, he says.

Ashok Kumar is the chairman of Seth Mukund Lal Memorial Institutions which have some 23,000 students. With around Rs 85-crore turnover, he runs his hotel chains — Mansingh Hotels in Rajasthan. (IANS)