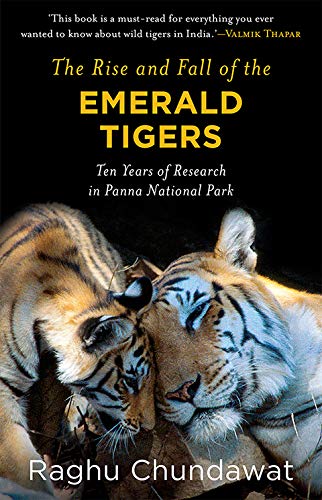 In a world of self-styled tiger experts, lack of research and scandalous cover-ups, eminent conservation biologist and wildlife crusader Raghu Chundawat’s book “The Rise and Fall of the Emerald Tigers…” is a bold, audacious and eye-opening account of the biggest systemic failures and wrongdoings in India’s dealings with its wildlife.

It brings together decades-long research, the intriguing science of tiger ecology, its conservation and the politics around it. It uncovers how the tiger population of Panna (which translates to Emerald in English), recovered through the late 1990s till early 2002 due to great efforts, but succumbed to extinction in cold-blood by early 2009, in front of his eyes.

Set to offend many, Chundawat doesn’t make generalised allegations but puts forth figures and names of people he holds responsible. He also exposes a system plagued by the habit of repeating mistakes, where, despite reaching out to the top offices, including the Chief Minister, bureaucrats and institutions, he couldn’t stop deaths of the free-ranging tigers he once helped revive.

“I had a front-row seat for the tiger’s extinction in Panna,” he writes.

The book shows how a sordid leadership and key institutions indulged in cover-ups through imaginary census, creating fake pug-marks, giving a free-run to poachers and reprimanding whistle-blowers — in the process misleading even Parliament and the Supreme Court. It reveals many misdeeds swept under the carpet by reckless authorities.

It explains almost everything one needs to know about tigers, conservation and politics. Foremost, it outlines that much of what went wrong still continues at the peril of our national animal.

Chundawat’s was a rare and early study of the tigers of a dry forest system — only two outdated researches were done before his work, in India and Nepal. The study, for the first time, used technology like radio-collars on both the tigers and their prey.

Watching many cubs growing to adulthood, Chundawat’s observations of 41 individual felines, during his study period of 1996 to 2006, is as if he spoke to the tigers and articulated their problems for the masses.

But above all, this book is a first-hand account of how fleeing from responsibility and reprimanding the whistleblowers killed years of hard work and wiped out all the tigers of Panna Tiger Reserve in Madhya Pradesh between 2002 and 2009.

Being at ground zero and having helped revive the national park’s tigers, thus creating a milestone which everyone wished to be associate with, Chundwat was also the first to notice that tigers in Panna were disappearing at an alarming pace.

In early 2005, he approached the National Tiger Conservation Authority (NTCA) with a report titled “Missing Tigers of Panna”, on the tigers his team was monitoring. However, instead of acting, authorities began a cover-up showing everything was well in Panna and even reprimanded him. Sariska Tiger Reserve of Rajshtan had already lost its tigers in 2005 and Panna was on the same path.

“I was publically labelled anti-establishment and accused of having a “hidden agenda” by the then head of NTCA. As the system closed ranks, it became clear that it would be very hard for me to pursue research work in the tiger area in future,” the author writes.

Chundawat recalls that when his research team removed some snares set by poachers from a critical tiger habitat, the park administration lashed out at him and his team, saying it was not their job to do so. The author was later barred from entering the park even as a paid tourist.

“It seemed everyone was conspiring against the tigers,” he notes, adding that even as authorities knew it, they did not act out of fear of holding someone responsible.

“Sariska fell first. Yet when our report found twenty tigers missing from Panna, the Indian authorities were unmoved,” the book says. It adds that while Sariska’s extinction happened “quietly”, Panna fell despite all the whistles being blown well before complete extinction.

The book reveals how even when informed about the dropping numbers of tigers, the authorities worked another cover-up in the form of fake census. “There had been so many opportunities to set it right but all energy was spent denying the problem and shooting the messenger,” Chundawat writes. He adds that had the census been conducted honestly, “this extinction need never happen”.

However, what surprised the author the most was not only the authorities’ reaction but also of colleagues and friends, as well as some national and international organisations, who remained distant spectators.

“In January 2008, the NTCA send an official team… to report on the status of tigers in Panna. But nothing concrete resulted: Their report appreciated good work being done there, although it also expressed some concern about the tiger numbers and suggested yet another camera-trapping assessment,” the book claims.

It further exposes how the authorities continued to deny the problem, even when the issue was raised in the Lok Sabha as a parliament question in March 2008.

The book provides instances to show how the world was misled through imaginary figures and botched-up census, especially in Ranthambore and later in Panna, to project a false image of the flourishing tiger.

Explaining why wildlife science in India is far behind the rest of the world, the book reflects the overall emotion that almost every wildlife researcher and conservationist goes through.

“India could have done better,” Chundawat says, adding that 2,226 tigers are not a good at all and reminding readers that “India had more tigers in 1973 than today”.

Written in the year when India recounts its tigers, the book questions: “Did we learn from our mistakes”? The author thinks not.

After the reintroduction of tigers in 2010, Panna today has a population of about 30 tigers from zero in eight years. For which Chundawat appreciates the leadership of Srinivas Murthy and his tireless staff.

The book, finally, conveys Chundawat’s anger and anguish over an apathetic trend that continues till date. (IANS)