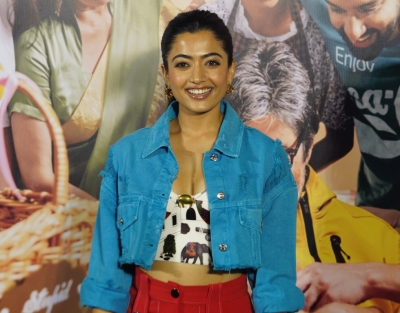 Mumbai– National crush Rashmika Mandanna will be seen in a party dance number for the first time in ‘The Hic Song’ from the upcoming Amitabh Bachchan-starrer ‘Goodbye’.

‘The Hic song’ is crooned by Sharvi Yadav and penned by Vikas and AT, the track is composed by Amit Trivedi and choreographed by Vijay Ganguly. The video shows Rashmika having a great time and acing her dance moves with her friends.

The actress said: “The Hic Song’ is a very peppy party number, beautifully sung by Sharvi Yadav and composed by Amit Trivedi. It’s something so different from the songs I have done before and my first party dance song. I thoroughly enjoyed shooting it and I hope the audience enjoys and dances like me too..”

Produced by Ektaa R Kapoor’s Balaji Motion Pictures in association with Good Co., ‘GoodBye’ is all set to release in cinemas on October 7. (IANS)