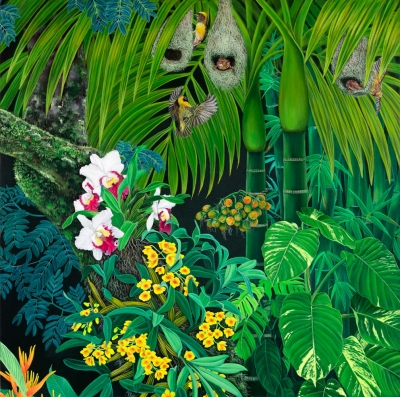 New Delhi– In a show titled ‘Flowering from the Chrysalis,’ contemporary artist Sandeep Jigdung has brought the crimson reds, vivid greens, and clear blue skies of Assam to the walls of Gallerie Nvya, inspired by his mother’s picturesque bamboo and wild orchid garden back in Assam. The solo exhibition of his recent works, painted during the pandemic, subtly and beautifully expresses the emergence of courage following the period of struggle that we have all endured and been through.

Jigdung’s vibrant landscape paintings, which he completed as a BFA and MFA in Painting at the College of Art in New Delhi, reveal his deep connection with nature, childhood nostalgia, and memories. Elements such as heliconia, lilies, orchids, palms, yams, fruits such as bananas, berries, elephant apples (Ou Tenga), and pumpkins; birds such as hummingbirds and hornbills; and insects such as bees, butterflies, and fireflies inhabit his works.

The Assam-born artist depicts the concept of chrysalis in a symbolic way in his most recent series of acrylic paintings, which consists of diptychs and triptychs. The artist’s vibrant narratives of nature during the day as well as the introspective hues of the night are featured in the body of work.

“The essence of the show is the spirit of nature which, like the seasons, is ever-changing yet assertive at the same time. It is also a tribute to the resilience of human beings who have been able to come out of trying times perhaps, due to the bounties of nature,” says Curator and Director Meher Kalra.

“I want the viewers to feel and see the beautiful nature that I portray in my canvases. Nature and the sublime have always been the impetus of my work. The memory of my formative years has been the time I spent in the beautiful hilly town of Diphu in Assam where I was born and brought up. The flowers and birds that grew in abundance in the wilderness and the colourful landscapes were the profound ‘spaces’ I grew up in. This childhood fascination with the ‘sublime wild’ left a lasting impression and this affair with the wild deeply inspired me as an artist. All of my works are blended on the same tones of celebrating nature and its authenticity depicts scenes from my childhood. Taking this inspiration and the etched impression, it is a deeper take on the past blissful memories and acts as a tribute to it,” says the artist Sandeep Jigdung.