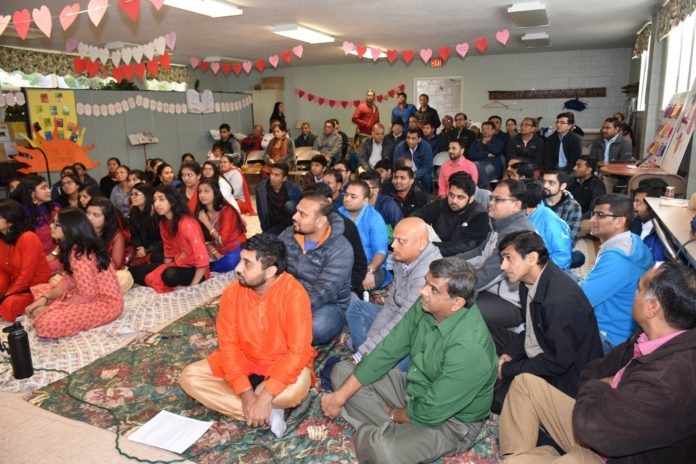 BURLINGTON, MA–Adults sang melodious Sanskrit hymns, schoolchildren performed vignettes on the tenets of the Gita – and in the background, blood was joyfully drawn.

This was all part of the scene at the Twadartham blood drive held this past week by members of Swadhyaya, the non-sectarian, non-denominational spiritual family inspired by Revered Pandurang Shastri Athavale, known by his followers as “Dadaji” (elder brother).

Revered Dadaji was aggrieved from childhood to see the lack of self-esteem that plagued contemporary society. He conducted a deep study of philosophy – he pretty much read every book in Mumbai’s Royal Asiatic Library by the age of 20 – and found that the absence of sense of worth stemmed from the overemphasis humans placed on inanimate “things”. Says a local organizer of the event, “Revered Dadaji came to the conclusion that human being’s sense of self-respect had become singularly dependent upon one’s possessions; in one’s quest for obtaining objects, one has lost sense of one’s true identity; (s)he created concepts such as wealth and fame and yet considers oneself incomplete without them – the end result is the hapless, hopeless humans we see around today”.

Revered Dadaji dedicated his life to reminding humans of their “inner divinity”. Revered Dadaji would embolden his followers to note that irrespective of their social or economic standing, the infinite divine energy was within and that that fact alone should fill one with pride. A lifetime of tireless, self-sacrificing service touched millions around the globe, and his followers now celebrate Revered Dadaji’s birthday, October 19th, as “Human Dignity Day”.  Revered Dadaji has been recognized in the East and the West with Ramon Magsaysay Award (1996) for Community Leadership and Templeton Prize (1997) for Progress in Religion, respectively.

Revered Dadaji further taught that spirituality-based self-worth is not a zero-sum game: If divinity is within me, it’s also with in others. So, reverence for others naturally follows respect for one’s own self.

Striving to make this concept practical, the Twadartham (“for you” in Sanskrit) blood drive was organized with inspiration from Revered Didi Talwalkar, who is Revered Dadaji’s daughter and current head of Swadhyaya Family. However, one member is quick to point out that the goal wasn’t to serve man – but to humbly serve God out of love and gratitude. “Regardless of differences in wealth or status, every single person is linked through a common blood maker. We’re all a divine family, connected through the same Father, and striving to foster this feeling was what today was about.”

As he watched his children make bookmarks adorned with Gita & Bible verses, one member of Burlington added, “When a person “donates” he feels superior to the donee. But today, our attitude is not of giving blood to a random “donee”, but instead, respectfully offering it as an expression of gratitude to the divinity within and in turn to our divine brother/sister”.

With same mindset, more than 200 members participated in Burlington, MA working with Kraft Donor Center at Dana-Farber Institute at Brigham and Women’s Hospital & American Red Cross. In Burlington, 66 units of blood were offered that would help save approximately 200 lives. Similarly, more than 8490 members participated across USA and Canada and approximately 2311 units of blood were offered by 2258 offerors.

Revered Dadaji once advised, “Man’s problems can be solved by bhakti – devotion to God understood as a loving expression of gratitude to God.” That’s why Revered Dadaji maintains bhakti is a social force. Last week, Burlington, MA got a taste of the sweetest of solutions, organizers said in a statement.