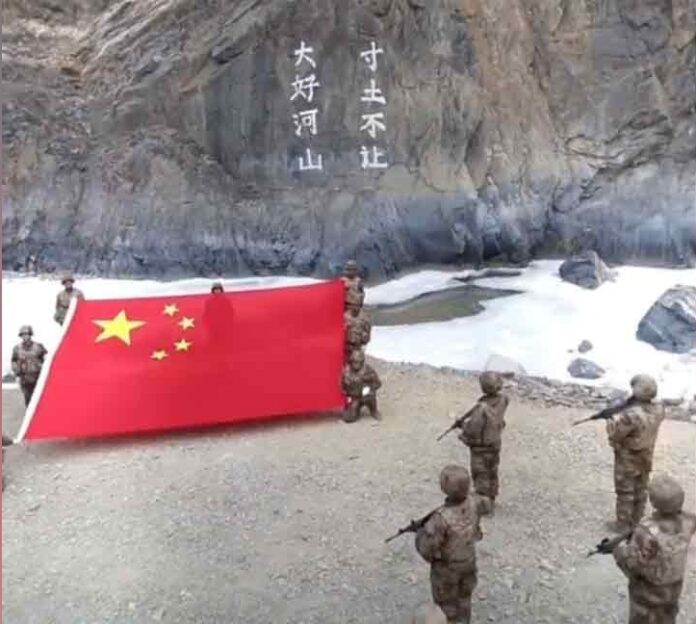 New Delhi–In the wake of the controversy over a video of Chinese PLA soldiers unfurling their national flag in Ladakh’s Galwan Valley to celebrate New Year that went viral, army sources have clarified that the spot shown was not in the disputed area, which is a demilitarised zone as agreed in the series of talks following the June 2020 clashes.

The video was shared by the Chinese media outlet on social media showing PLA troops celebrating New Year and unfurling the flag, with the caption: “China’s national flag rises over Galwan Valley on the New Year Day of 2022.”

It also said that the flag was “special since it once flew over Tiananmen Square in Beijing”.

The PLA troops did celebrate the New Year at Galwan Valley and unfurled the Chinese flag, but well away from the demilitarised zone, and not at all near the bend of river, where the clash between the two armies took place in June 2020, said army sources.

The Chinese troops celebrated New Year in an area which is very much in Chinese territory and not disputed, so there is no point to question this action, the sources said.

In June 2020, 20 Indian soldiers were martyred in the clash and later awarded gallantry awards, while the PLA lost an undisclosed number, said to be 45.

After that, both countries held a series of talks for disengagement, and in one of these NSA Ajit Doval met Chinese Foreign Minister Wang Yi, and after that, both armies mutually agreed to step 2 km back from the river bend at Galwan Valley. (IANS)