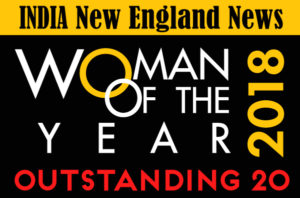 Ms. Kelkar has appeared in Films and various regional and national Commercials. She has starred in a lead role in two Short films that will be releasing soon. She is seen in the newly released Hollywood movie ‘I Feel Pretty’ starring Amy Schumer.

She has been on the Boston International Film Festival Committee for past two seasons. She is a busy Super Mom, a job that she takes very seriously.

Sheetal Kelkar: I was born in Mumbai, grew up in Vadodara and have settled in Boston for more than a decade. I have appeared in films and various regional and national commercials. Recently, I played lead role in two Short films, soon to be released and am cast in an upcoming short film, which is in pre-production stage.

I am also seen in the newly released Hollywood film ‘I Feel Pretty’ starring Amy Schumer. I have worked for names like GE, Harvard Business, Philips, CVS, Blue Cross Blue Shield, Hasbro, Bank of America, Liberty Mutual, Wayfair and many more. I have walked in fashion shows in New England and New Jersey.

I have been fortunate to have worked with amazing people and award winning directors and actors so far. Through my work, I get to make a difference through creativity and storytelling. Over the last few years I have been able to make a reputable name and place for myself in the Indian-American community and the New England acting community.

Having said that, I still have a long way to go. Last but not least, I am a mom and I take that job very seriously, no compromises. It involves a lot of hard work, time management and juggling of roles. In my profession I don’t have the liberty to look tired either! I hope I am leading by example and inspiring my own family as well as others.

SK: As an actor I give back to the Film and Acting community by being on the Boston International Film Festival Committee. I was invited to join two years back and it has been great so far. I have always given back to my local community, by volunteering my time for various charitable organizations. I am often invited as a guest or to judge dance competitions, pageants, etc. I consider it as a way of sharing my talents for a cause. My parents have always taught me the value of kindness.

SK: Acting, Dance and Writing are my passion and Modeling is my hobby. My love for films- Bollywood and Hollywood has led me to be on the Film screening committee of Boston International Film Festival. Being on the other side of the table helps me grow as an actress too.

I am trained in Indian classical dance Bharatnatyam for 10 years. I have been performing & choreographing Bollywood dance in New England area on and off, for past several years. I have a deep interest in Writing since childhood. Dance & Writing are my favorite forms of expression. I have always taken my hobbies & interests to a further level. I modeled in my first fashion show back in India when I was 16. Many years later, I competed in pageants and won the Mrs. India New England 2014 crown in Boston. I was also in Top 2 at Nationals, and Top 5 at Worldwide.

SK: Winning the title of the very first Mrs. India New England in 2014 was a landmark event for me. I am thankful for the opportunity. I feel that being the first one, I had to figure out my own path. Until I won the crown, modeling, pageants & glamor industry for married women with kids was unfamiliar in the Indian-American New England community.

I believe that my pageant win, my community involvement and the way I carried myself during my reign and eventual success in the acting/modeling industry was instrumental in changing that perception and normalizing it. It opened doors for others after that, and I am glad to have been one of the firsts to have paved that path.

I get messages from people telling me I inspire them. I also get asked for advice/guidance related to acting and filmmaking. It is gratifying to know that I have created a positive influence through my endeavors.

SK: I enjoy reading books by Deepak Chopra. I am a spiritual person. He explains how to be practical about spirituality. I was touched by Malala Yousafzai’s story and work. I also love the Harry Potter series. Apart from the brilliant writing, it has an intelligent, strong female character. In the era of Me Too movement and Woman empowerment, we need more stories about female heroes of all ages.

SK: I have many but one of my favorites is “If not now, when?” I feel that life is too short. I like to think outside the box, take risks and celebrate life to the fullest. I have dreams to fulfill and goals to achieve. There is no right and wrong time to follow your inner calling.

SK: On a professional level, I have been admiring Priyanka Chopra a lot lately. She has broken many stereotypes. She has represented Indians and Indian-Americans well in the mainstream entertainment industry, through her Miss World 2000 win and her acting career. I can identify with her on many levels. She is a well-rounded achiever and has become a global icon.

On a personal level, my grandfather’s story will always inspire me. He did not have much money in his childhood. He was a visionary. By the time he was in mid-thirties, he had developed his business in three cities, Vadodara, Mumbai & Pune. He was successful and a gem of a human being. He left behind a name & goodwill in society that lasts even today. My family inspires me to be my best. I want to be remembered as an inspiration, however big or small.

SK: I believe in being authentic and original in whatever I do. I live my life with positivity and love. I am also a big believer in destiny and Karma.