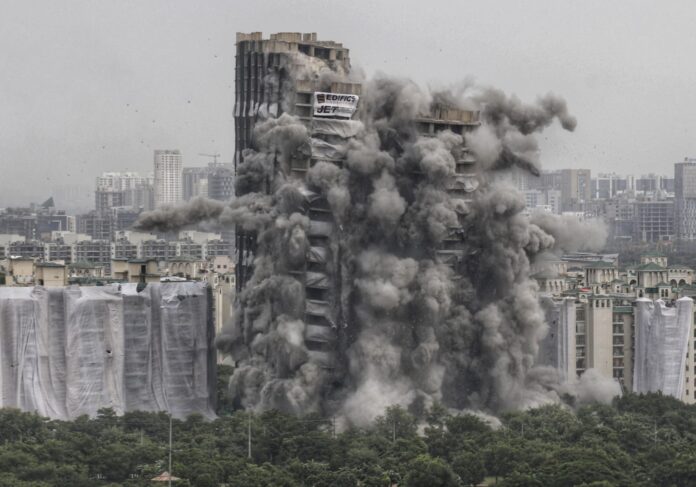 New Delhi–With the fall of India’s one of the largest towers, a legal fight of over 10 years by senior citizens has come to an end on Sunday.

The fall of the twin towers will mark the victory of the group of elderly people who waged a war against Supertech in 2009 for violating bylaws.

A group of four elderly people — U.B.S. Teotia; 80, S.K. Sharma, 74; Ravi Bajaj, 65; and M.K. Jain, 59 — were the first who raised the alarm against the violation of laws by Supertech for building the twin towers. This group included retired central government officials who collected donations to continue their legal fight from Allahabad High Court to the Supreme Court against the builder.

Teotia, the RWA president of Emerald Court, had moved into the society in 2010. His first argument with the developer was during the monsoon of that year, when the basements were flooded with rainwater. The flat owners were told that two 25-storey towers would be constructed instead. Teotia and a group of retired government officials lodged repeated complaints with the then RWA. But to no avail.

While speaking to IANS, Teotia Said, “The society was considered elite that time, but when I moved into the society in 2010, there was nothing as promised. In addition, these two towers were started to be constructed, which was illegal and not sanctioned.”

He said, “First of all we approached the builders but to no avail. Next, we went to the Noida Authority and the police, but there were no results. We also approached the then minister Azam Khan but that was also of no use. And, ultimately, we reached the Allahabad High court in 2012.”

Two years later, the high court ruled in favour of them and ordered the towers to be razed. The court also asked the builder to refund the buyers and slammed the Noida Authority for colluding with the developer to allow the construction. Even after the ruling which came in their favour from the high court, the fight continued in the Supreme Courts. But these senior citizens did not give up. They continued their fight as the builders Supertech challenged the order in the apex court.

The petition was filed on behalf of Emerald Court RWA and not in the name of any individual. Besides Teotia, the core team included Ravi Bajaj (72), S.K. Sharma (75), M.K. Jain (he died last year after Covid), and Gaurav Devnath (70), who relentlessly pursued the case and went for every hearing.

Finally, the Supreme Court gave the decision in the favour of the elderly people and the towers were demolished finally. (IANS)