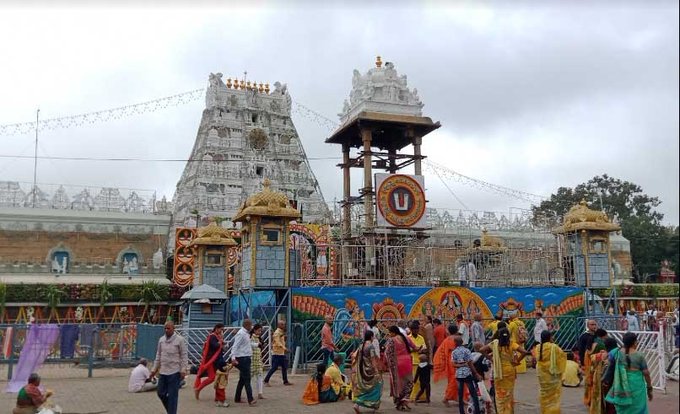 Tirupati–A row has erupted over Tirumala temple’s honorary chief priest A.V. Ramana Dikshitulu raising concern over the temple remaining open despite the growing number of Covid-19 cases among priests. He even warned of “a disaster”.

He tweeted on Thursday that 15 out of 50 archakas (priests) tested positive while results of 25 others are awaited. Tagging Chief Minister Y.S. Jagan Mohan Reddy, he wrote that the Tirumala Tirupati Devasthanam (TTD) Executive Officer and Additional Executive Officer refused to stop ‘darshan’ and alleged that they are following “anti hereditary archaka and anti-Brahmin policy” of Telugu Desam Party (TDP) and its chief Chandrababu Naidu. “Disaster if this continues. Please take action,” he wrote.

TTD chairman Y.V. Subba Reddy, however, differed with the honorary chief priest and claimed that the situation does not warrant closure of the temple for darshan.

Subba Reddy told reporters after a meeting with priests that Ramana Dikshitulu should have conveyed his opinion to the TTD board instead of making a comment in social media.

He said it was not proper to give political colour to priests testing positive. “Making such comments before the media is not good. After our government came to power, the honorary chief priest was appointed and he is being paid the honorarium,” said Subba Reddy, who is the maternal uncle of the Chief Minister.

He asked EO and Additional EO to call Ramana Dikshitulu and discuss the issue with him.

He said since the re-opening of the temple for darshan, 140 TTD employees have tested positive for Covid and they include 14 priests.

The TTD Chairman said 60 of those tested positive are the security personnel who were drawn from the Andhra Pradesh Special Police (APSP) battalion. Those who contracted the virus also include 16 employees who prepare ‘prasadam’.

Subba Reddy said 70 of the affected employees have recovered, living a normal life and have even resumed duties.

He claimed that none of the pilgrims visiting the temple was infected by the virus.

Tirumala temple had re-opened for pilgrims on June 8 after remaining closed for 80 days due to the Covid-19 induced lockdown.

Initially, the temple was allowing only 6,000 pilgrims per day with strict adherence to the Covid-19 protocol. The number of pilgrims was later doubled. (IANS)