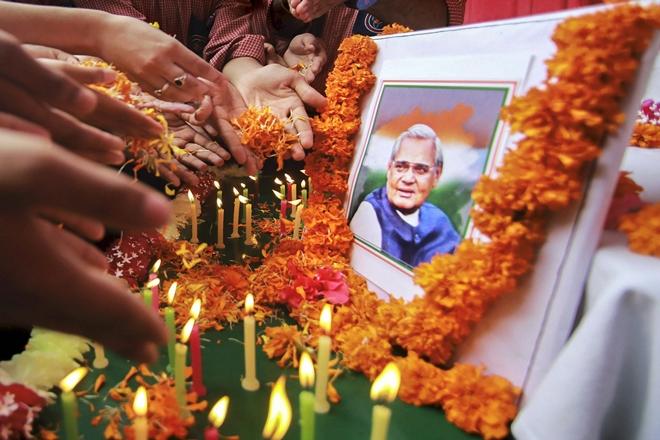 New Delhi– Former Prime Minister Atal Bihari Vajpayee, whose appeal transcended party lines and geographical boundaries, was cremated with full military honours on Friday in the presence of the country’s top leaders cutting across the political divide and adoring masses.

Amidst chanting of vedic hymns and firing of a 21-gun salute by soldiers, his foster-daughter Namita lit the funeral pyre in the presence of a galaxy of leaders including Prime Minister Narendra Modi, President Ram Nath Kovind, Vice President M. Venkaiah Naidu, political leaders and foreign dignitaries bidding adieu to the departed leader at the Rashtriya Smriti Sthal.

Modi and BJP chief Amit Shah had earlier walked with the gun-carriage carrying the mortal remains of Vajpayee as it made its way from the party headquarters at Deen Dayal Upadhyay Marg to the cremation venue, a designated spot for the last rites of Presidents, Vice Presidents and Prime Ministers.

People had been thronging Vajpayee’s residence since morning on Krishna Menon Marg, where the body was kept since Thursday night.

The crowds swelled as the mortal remains were brought to the BJP’s new headquarters and kept there for over three hours for people to pay their last respects.

Delayed by an hour, the final journey saw a sea of people converging on the route to the Rashtriya Smriti Sthal, a distance of less than 3 km on the banks of the Yamuna river.

In keeping with the military traditions, the three service chiefs placed wreaths on the body of Vajpayee before leaders paid their tributes for one last time.

The tricolour that was wrapped around Vajpayee’s body was given to his foster granddaughter Niharika after which the body was handed over to the family for the last rites.

The cremation ground was surcharged with emotion as Vajpayee’s body was consigned to the flames. People, many of them misty-eyed, raised slogans like “Atalji amar rahen”.

People gathered at places enroute the procession, including a madrassa, raising slogans hailing Vajpayee. Many of the people who came had grown up with Vajpayee’s spellbinding oratory and were impressed with his poems.

Vajpayee had a pan-India appeal cutting across boundaries of caste, community, language and his flair for foreign policy and initiatives was acknowledged globally. His political rivals were also touched by his gentleness and magnanimity.

When the final journey started from the BJP’s central office, Modi and Amit Shah walked behind the flower-decked gun carriage carrying the body of Vajpayee draped in the tricolour as security personnel kept a tight watch.

Deferring to Vajpayee’s stature, Modi and Shah walked the entire route till the cremation ground leading the mourners, who included union ministers, BJP leaders and tens of thousands of people.

People threw flower petals on the casket all through the three-kilometre route as an expression of their love, respect and admiration for the late leader.

Tight security arrangements had been made for the final procession by the security forces anticipating the participation of a large number of people.

The country is observing a seven-day state mourning as a mark of respect for the leader who had been decorated with the Bharat Ratna and was very popular. The tricolour is flying half-staff.