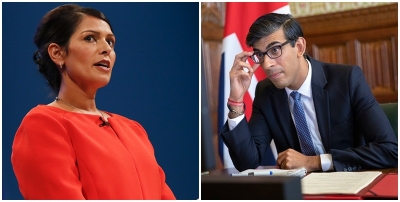 London– The two senior cabinet ministers of Indian origin in the British government – Chancellor of the Exchequer Rishi Sunak and Home Secretary Priti Patel – do not appear to be on the same page as far as support to Prime Minister Boris Johnson is concerned. Sunak’s endorsement of his boss is seen by British media as “tepid”, as compared Patels wholesome loyalty to the incumbent of 10 Downing Street.

The Independent reported: “Cabinet divisions the Downing Street party scandal have widened as Priti Patel appeared to criticise Rishi Sunak for declining to back the Prime Minister fully.” She was seemingly referring to Sunak’s absence from “Prime Minister’s Questions” slot in the House of Commons at which Johnson tendered a grovelling apology and was pilloried by the Leader of Opposition Sir Keir Starmer.

Sunak was, in fact, on a visit to Devon, some 225 miles away from London, and only tweeted a message eight hours after the event. His carefully worded message said: “The PM was right to apologise and I support his request for patience while Sue Gray carries out her enquiry.”

Gray is a senior civil servant, who has been entrusted with the onerous and unenviable task of investigating into 17 odd parties reportedly held at Downing Street during Covid lockdowns. Her brief is to find out if these were social gatherings and, so, broke the law. Johnson’s prime ministership is said to hinge on her discovery, although, technically, whether he violated the ministerial code by having knowledge of or attending non-work get-togethers, may not be her remit. There is separately the more serious issue of Johnson misleading Parliament, which is reason for a resignation. Gray’s report is expected next week.

Asked on Sky News if she agreed with Sunak’s “lukewarm support” for Johnson’s apology in the Commons, Patel replied: “No! On the contrary, I have publicly supported the Prime Minister and actually you’re speaking to the Home Secretary who spends all my time day in day out supporting the Prime Minister, his agenda of delivering on the people’s priorities and the work that we do.”

Johnson is in trouble on various fronts, from accepting a donation from a businessman to refurbish his official residence – a significant part of which he allegedly failed to declare, as is mandatory under ministerial and MPs’ codes in the United Kingdom – and about he and his office serially violating Covid-19 lockdown laws introduced by his government and ratified by Parliament since 2020.

Rather notoriously, there was a garden party at Downing Street on May 20, 2020 during the height of restrictions on the public, where 100 people were invited and asked to “bring you own bottle” or “BYOB”. The invitation went out from Johnson’s Principal Private Secretary and was attended by the Prime Minister and his wife Carrie. His explanation that he thought it was a work meeting and didn’t know it the assembly contravened the existing law has been rejected by an overwhelming section of Britons in opinion polls.

Furthermore, the night before the British monarch Queen Elizabeth’s late husband, the Duke of Edinburgh’s funeral last year – when Britain was in official mourning as well as in Covid lockdown – there was a party in the basement of Downing Street, with drinking and dancing to disco music conducted by a DJ. The alcohol for the binge was smuggled into the building in a suitcase.

Sunak and Patel’s political standings at present are quite different. The former who entered parliament five years after the latter did, has sped past her and is the bookmakers’ favourite to succeed Johnson in case he steps down. Sunak’s performance as Chancellor in saving livelihoods with generous grants and furloughs during the Covid crisis has endeared him to his party and the British public.

Patel, on the other hand, has from all accounts struggled at the Home Office. She was also indicted for violating the ministerial code with “bullying” behaviour towards civil servants. But Johnson did not dismiss her as has been the convention. The senior-most civil servant in her ministry resigned and had to be paid heavy compensation by the treasury to withdraw a suit he had filed at a tribunal.

A leadership contest in Johnson’s ruling Conservative party is triggered by 15 per cent of its MPs asking for it. This works out to 54 lawmakers. Senior Conservative MP David Davies shocked the Commons on Wednesday by telling Johnson to his face: “In the name of God, go!” (IANS)