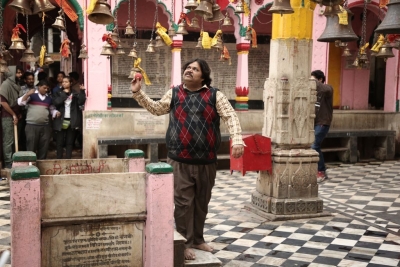 Director Aayush Saxena’s ‘Urf Ghanta’ is a light-hearted comedy with lots of messages for people of the hinterland.

The film begins on a curious note. In the dark of the night, the driver along with the passengers of a moving bus find a chubby, nude man standing at a bus stop. The bus conductor thinking him to be a sadhu, asks him, “Are you a Naga?”

“No, Nanga,” replies the man despondently.

En route, he narrates how he landed up stark naked at the bus stop.

‘Urf Ghanta’ is the story of a 40-year-old bachelor Ghanteshwar’s quest to find a bride for himself. A simpleton by nature and forsaken by destiny, even the Gods can’t help poor Ghanta in his mission. His well-wishers as well as his best friend Sudama try to help him, but all in vain.

Since each one has to trod their journey in life alone, Ghanta too has no choice and as they say, everything happens for the best, Ghanta’s journey ends on a happy note, after delivering a load full of laughs for the audience.

The film largely hinges around the talented Jeetu Shivhare (he also shares the writing credits) who essays the naive and simpleton Ghanta to the tee. Thick-skinned he is not, but despite being sensitive, his vulnerable demeanour often elicits chuckles. More often than not, it makes you wonder, do such people exist? His character is stretched wide to suit the narrative, and you do feel pity for him.

Offering advice to Ghanta on several occasions, as Lord Shiva and Krishna, is Ravi Krishan, who delivers a staid performance. He unabashedly walks through his role, rattling his dialogues in his typical “Ravi Krishan” style.

Mohan Kapur is fairly natural as the unknown stranger on the banks of the river, offering pearls of wisdom to Ghanta that his truth is not the end of the world.

Ram Naresh Diwakar as Sudama, Rajendra Gupta as the Doctor, Ghanta’s Chacha and Chachi, Tauji, and all the other supporting actors are earnest in their disposition, and they effectively grow on you.

While the taut plot keeps you hooked most of the time, it meanders with the death of Tauji, but it veers back on track in time to hook the audience. Overall, you’d say, ‘Urf Ghanta’ after watching the film. (IANS)