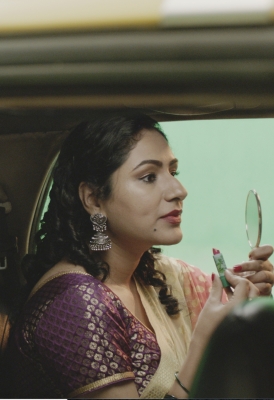 Life may be a bitch at times, and at the Anand household, with its centre of attention being Paree their dog, you’d expect this film to revolve around their canine, but instead what you witness is a cute, sensitive film about life and relationships.

Nirmal Anand leads a busy and mundane life as the regional manager of a pharmaceutical company selling DiaBye, a drug for diabetic patients. But when he is diagnosed with diabetes himself, he starts questioning life till he gets an opportunity to act in a film. How this acting stint threatens the very foundation of his marriage, forms the crux of the narrative.

With well-etched characters and competent actors performing their parts convincingly, the plot meanders on a mid-line graph questioning modern-day relationships. While the writing is simple and straightforward, the screenplay gets a bit confusing for a moment when Sarah dreams of her past. Alhough it has no major dramatic inciting moments, the film holds your attention till the last frame.

The casting is near perfect and the actors perform their parts with sincerity. Karanveer Khullar is endearing as the forever-despondent Nirmal Anand. He sensitively handles the complex nuances of his character with elan and his pain, on-screen, is palpable.

Gillian Pinto as Nirmal’s wife Sarah is equally competent. She delivers what is needed for her role with poise and confidence. Kushboo as the actress Gulaboo is bright and effective.

Mounted on a shoe-string budget with moderate production values, the film is efficiently shot by cinematographer Krish Makhija and the visuals along with the soundtrack are astutely layered by the editor Pavan Bhat.

Overall, ‘Nirmal Anand Ki Puppy’ is a warm film filled with human emotions, and most of all, it is unexpectedly moving. (IANS)