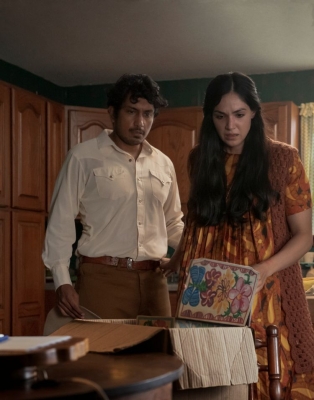 The first frame of the film introduces us to the premise of the narrative. It is a quote from the Polish-British novelist Joseph Conrad that states, “The belief in a supernatural source of evil is not necessary; men alone are quite capable of every wickedness.”

Director Ryan Zaragoza’s film is inspired by true events. ‘Madres’, meaning mothers in Spanish, tells us the story of Diana (Ariana Guerra), a young, expectant mother. Her tale highlights the forced sterilisation of women and men across the US as part of the National Eugenics Movement.

Set in the 1970s, the narrative begins with a heavily pregnant Diana, a non-Spanish-speaking, second generation American, and her illegal migrant husband Beto (Tenoch Huerta), moving into a small town in northern California, where Beto has been offered a job to manage a farm.

Beto settles down comfortably with work et al, Diana, an aspiring author, finds herself alienated by the community and is plagued by ominous nightmares. She also suffers from body rashes.

Once while exploring their creepy old house, Diana stumbles upon a grisly talisman and some old newspaper clippings belonging to the previous residents of the house. The newspaper clippings reveal that pesticides were causing health problems in migrant workers.

As she tries broaching the topic with locals, including Anita (Elpidia Carrillo), the shopkeeper who foists superstitious charms, she is hushed and told that the community is jinxed by an obscure curse and her hallucinations are an expression of her anxieties about the community’s health.

Defying everyone in town, how Diana prods with her discoveries, which lead her to a truth much stranger and terrifying, forms the crux of the narrative.

Designed with horror tropes, the film never lets its sharp dramatic focus slacken. It smartly keeps the focus on its protagonist and stays almost entirely out of triumph-of-the-underdog sentimentality.

Overall, ‘Madres’ is ultimately about a determined mother’s fight to make her innate sense of self-worth stick and be acknowledged by the world. (IANS)