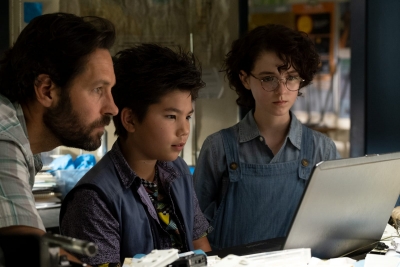 Director Jason Reitman’s ‘Ghostbusters: Afterlife’ is an underwhelming, lazy, and just mildly entertaining film. This is the fourth film of its franchise, and technically, this one is the sequel to the first two original Ghostbusters movies, which were released in 1984 and 1989.

The story of this film is set across three decades after the events of the two above-mentioned films. It follows the lives of a strapped-for-cash single mother Callie Spengler (Carrie Coon) and her two children, Trevor (Finn Wolfhard) and Phoebe (Mckenna Grace). They are the daughter and grandchildren of the late Egon Spengler (Harold Ramis).

After inheriting a rickety old farmhouse in remote Summerville, Oklahoma, from her estranged father, Callie and her two kids move there because she had no other choice.

Moving into their new house, the nerdy Phoebe, who is smart and inquisitive, and possesses scientific acumen far beyond her years, befriends Podcast (Logan Kim), a classmate who loves science. Trevor is all out to impress Lucky (Celeste O’Connor), a waitress whom he meets at a drive-in restaurant, and their mother Callie dates Phoebe’s summer school teacher, Mr Grooberson (Paul Rudd).

It is during their stay in Summerville that they experience strange things happening in town, more accurately, supernatural stuff, starting from the unexplained vibrations and quakes that could threaten their lives. And when Phoebe rummages through her grandfather’s possessions, she soon learns who her grandfather was and his calling in life.

The cast gives fine, fun-filled performances, but unfortunately, they fail to impress, because the writing is shoddy. The attempts at comic relief are dull at times and silly at other times.

The same goes with the adventure-laden Ghost trail that Phoebe, Podcast and Trevor undertake. The sci-fi mystery element, too, barely generates any suspense, and everything else seems tacked on, throwaway and filler, including the romance between Callie and Mr Grooberson, Trevor and Lucky, and the friendship between Phoebe and Podcast.

Overall, the film boasts of upgraded special effects with decent CGI, which playfully incorporates visual touches that recall the ‘Ghostbusters’ of the past, yet, these don’t make the film outstanding. (IANS)