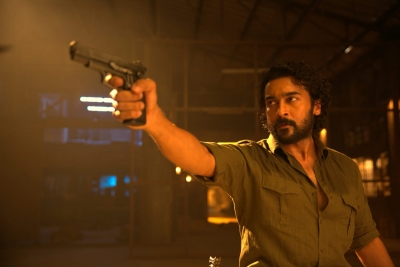 Director Pandiraj’s ‘Etharkkum Thunindhavan’ is an out-and-out commercial entertainer that advocates strong measures for the safety of women.

The film is unlike any of the earlier projects of Pandiraj, who is known for his light-hearted, feel-good films. ‘Etharkkum Thunindhavan’ is an intense film that shines the light on a really serious social issue that has ruined several families.

Certain festivals and practices put in place by the elders of the region facilitate a proper grievance redressal and support system for the brides who get married to men from outside their village. However, the relationship between the elders of both villages turns sour following the death of a married woman from Then Naadu.

To add to this, one of the prominent leaders of the Then Naadu side commits suicide along with his wife and daughter under mysterious circumstances.

Aadhirayar (Sathyaraj), one of the village elders of Then Naadu, and his lawyer son Kannabiran (Suriya) stand for the well being of the brides from the village. Needless to say, Kannabiran enjoys a good reputation among the people of his village. However, it also makes him lock horns with Inba (Vinay Rai), a vicious and wealthy leader from Vada Naadu who has friends in powerful places.

One day, Kannabiran gets a call from a young girl who sounds desperate. She seeks his help and wants to talk to him in person. However, before she has a chance to meet him, she is killed and her death is made to look like an accident caused by her own carelessness.

Eventually, Kannabiran realises that the girl was being blackmailed and that the issue she was trying to alert him to was no ordinary problem. He also discovers that it is a highly trained and remorseless gang that is behind her death and that scores of other women and their families are in their clutches, shuddering in fear for their dignity. How he rescues the women from the clutches of this gang is what the film is all about…

The positives first. The film attempts to create an awareness among audiences on how society has got its priorities misplaced while assigning blame for crimes. It stresses on the point that it is the perpetrators of a crime who have to be shamed and not the victims. A dialogue that Aadhini (Priyanka Arul Mohan) delivers in the film in this regard stands out. I am not reproducing it here for fear of ruining the suspense element.

Next, the film does not just showcase problems but also shows solutions. The innovative and refreshing manner in which Suriya responds to a threat posed by Inba (Vinay Rai) in the film is worth appreciation. That again, wins a brownie point for the director.

One other heartening fact is that the heroine of the film, Priyanka Arul Mohan, has a really central role to play in the plot. In fact, the story begins to gain pace only after her character gets involved in the issue.

D. Imman’s music and Ratnavelu’s camera are big pluses for the film.

Now, coming to the negatives.

Several sequences in the first half of the film appear to be either exaggerated or artificial. Surprisingly, realism takes a backseat, which is kind of unusual in a Pandiraj film, and that deals a powerful blow to the overall impact made by the film.

The story lacks pace almost all through the first half. It is only in the second half that the plot picks up steam.

It’s evident that the makers of the film want to please the women audiences.

Therefore, they seem to have gone out of their way to glorify women all through the film. From festivals that are observed to celebrate the birth of a girl child to explaining about a practice which facilitates a proper grievance redressal and support system to women, the film is only about glorifying women so much so that there is not a single negative female character in the film. In other words, all the villains in the film are men and all the victims, women.

Suriya comes up with a neat performance in ‘Etharkkum Thunindhavan’ as does Priyanka Arul Mohan. Both impress. Sathyaraj and Saranya Ponvannan, both known for having delivered several exceptional performances before, strangely don’t seem to fit in and their portions lack realism.

Vinay Rai as the villain is just brilliant. As the harbinger of evil, he just rules. One other person who does a commendable job is Devadarshini as Anjumani. Blessed with a gift for timing, Devadarshini is just outstanding when it comes to comedy sequences.

In all, ‘Etharkkum Thunindhavan’ has a strong and commendable message to deliver but the manner in which it is communicated isn’t impressive enough! (IANS)