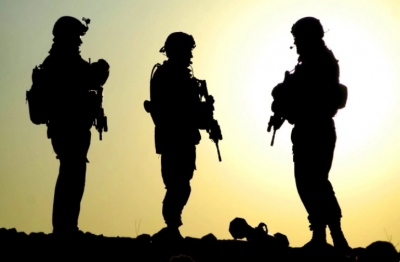 R.W. Apple Jr. wrote back in 2001 that “like an unwelcome specter from an unhappy past, the ominous word ‘quagmire’ has begun to haunt conversations among government officials and students of foreign policy, both here and abroad. Could Afghanistan become another Vietnam?”

It took 20 years for the entire world to witness the US exit from Afghanistan. Shocking pictures of Afghan civilians clinging onto a US C17 military aircraft appeared in the media. Some of them shockingly perished in midair at the Kabul airport.

The US had to live another Saigon moment. Pictures of US withdrawal in Saigon circulated in the media — the famous image of a man with a white shirt reaching down to grab a person at the top of a staircase to board the helicopter.

On the afternoon of April 29, 1975, CIA officer Oren Bartholomew Harnage was assisting the fleeing refugees and this was in 22 Gia Long Street and not the US Embassy, photographed by Dutch journalist Van Es.

Back then, President Nixon’s exit from Vietnam had 130,000 South Vietnamese evacuated to the US bases in Guam and the Philippines. Then the evacuees were resettled in the US.

Just like refugees who fled Communist rule, today, the same obligation to protect Afghan refugees fleeing the Taliban clutches has fallen on the United States. According to ORF scholar Harsh Pant, ‘the hard-won rights for women and minorities and democracy have already been sacrificed at the altar, reaching a modus vivendi with the Taliban’.

The US withdrawal was depicted as a humiliation and a loss, falling short of not capturing the accurate strategic dimensions and how the exit would impact India and the regional security of South Asia, especially to smaller South Asian neighbours like Sri Lanka, Bangladesh and the Maldives.

The failure of non-military instruments of power
Robert M Gates, in his book ‘Exercise of Power’, admits that “it is probably true that Brent Scowcroft and I as National Security Advisor and deputy should have at least devoted some time to focus on how the US and others might help Afghanistan after a decade of war… we certainly sent the wrong signal when we closed our embassy after the Soviets left. After helping the Afghans defeat the Soviets, we presumably had the foundation of at least some goodwill”. The lost opportunity in 1989 was due to the US focus on Eastern Europe than Afghanistan.

With the absence of the US between 1996 and 2001, Osama Bin Laden established camps in Afghanistan that trained an estimated ten thousand terrorist fighters. Afghanistan became a state sponsor of terror, and a state sponsored by terror writes President George W. Bush in his memoir Decision Point.

Twenty-six days after the 9/11 attack, US military began its airstrikes in Afghanistan. Taliban and al-Qaeda were ousted from Afghanistan by early 2002, with 27 American lives lost and $20 billion spent. After 20 years, the nation building cost was nearly $2 trillion.

Gates observed, “We and Afghans would have been better served had our military departed in 2002 and had we thereafter relieved on our non-military instruments of national power and patience”, believing that lasting change would come within a more realistic projection.

George Town Scholar Christine C Fair rightly assessed that “After clearing Afghanistan of Al Qaeda, which happened in 2004, the United States should have withdrawn. When the United States decided to declare war on the Taliban and enter into a highly ill-devised state-building fiasco, it should have realised that this would be a disaster absent any policy to stop Pakistan from supporting the Taliban”.

According to Sarah Chaves, while Pakistan was a key factor for the Taliban tentacles to grow in Afghanistan, the Afghan government’s corruption is another apparent factor.

Taliban and China
The US has faced multiple exits and several cycles of proxy wars since the end of the cold war when the hammer and the sickle flag fell in Kremlin. US exit from Afghanistan was a decision taken by the previous Trump administration, taken forward by President Biden. The withdrawal strategy leaves China, the emerging Asia power, with more responsibility to balance the Taliban occupation, making China’s western frontier of Xinjiang open for multiple security threats.

A month ago, Taliban leaders assured China that they will not allow anyone to use Afghan soil against China and support China to maintain security in their border areas in the Wakhan corridor.

However, China’s BRI still remains vulnerable when the US leaves Afghanistan, a geographical pivot state wedged between Central and South Asian regions. The calculated exit of the unending war in Afghanistan is a strategy that was in the making for many years in Washington.

It was wholly executed by Biden. The danger for the US exit is not the Taliban’s hold, but their tentacles and extremist agenda will expand through its proxies to multiple geographies in the region, threatening the regional security balance.

Taliban and smaller South Asian nations
There is a clear and present danger for India from Taliban. India which focused on its security concerns in the recent past towards north (China) and West (Pakistan) would need a broader spectrum of focus towards the South (Sri Lanka and the Maldives) and east (Bangladesh).

Taliban’s proxies in Bangladesh – Jund al-Tawheed Khalifa, Harkat-ul-Jihad-al-Islami (HuJI-B), AQIS, and Jamaat-ul-Mujahideen Bangladesh (JMB) will have a new lease of life with the Taliban grip in Afghanistan. The Maldives, with its highest per capita contribution to foreign terrorist fighters, will be another nation that will be vulnerable and radicalised extremist in the country who has contact will see an opportunity with the Taliban’s emergence to power.

In Sri Lanka, the burqa ban, madrasa regulation, and force cremation of Muslims are clear optics towards further radicalisation, which the Taliban will exploit. Jihadist movements such as National Tohweed Jamath (NTJ) with contacts with South Indian cells, will find their energy back with Taliban return. Smaller South Asian nations with weak security structures will be fertile grounds for the Taliban to push the extremist agenda and suppress the secular movements.

Sri Lanka, which faced the most significant terror attack in April 2019, is vulnerable to future security threats with the weak political environment. Pakistan will be a breeding ground due to its support towards Taliban insurgents to spread their activity.

Pakistan Prime Minister Imran Khan views the Taliban capture as a moment of freedom, saying, ‘Afghanistan has broken the shackles of slavery. The Taliban’s grip and expanse will directly threaten India and many other smaller South Asian nations. Anti-India groups such as LeT and JeM have already found sanctuary in Afghanistan due to the Taliban and ISI.

The re-Talibanisation of Afghanistan will have severe consequences to Indian national security. The radical Islamic elements will flow across borders easily due to a lack of infrastructure to counter the threat within the region. The multi jurisdictional structures for intelligence sharing and counter-terrorism within South Asia are underfunded and underdeveloped.

Taliban 2.0 and the Indo Pacific Greater Pakistan-China and Sri Lanka-China collaboration and Chinese projects such as CPEC of Hambantota/Port City are development projects to accelerate economic growth. In reality, the security challenges from the Taliban can have a destabilising effect on these projects and cause severe delays. China’s inroads n South Asia are well-established in pro-China centric nations within the BRI.

Many of these nations did not view the U.S. presence in the region as a positive trend, depicting it as a potential threat to national security projects from miscalculated policy decisions. The U.S. withdrawal is a direct message to the regional powers to look after their own regional security concerns than depending on Washington. The Western allies will draw another strategy in Taliban 2.0, perhaps more towards Indo-Pacific.

Thus filling the gap after the withdrawal of the United States will be a challenging task for India, China and Russia. Maintaining the regional security of Central Asia and South Asia is going to be highly contested. China is far from filling the gap and perhaps will not focus on wider security concerns. Russia is monitoring the situation, leaving the burden to India that will face a clear, direct security threat from all directions including smaller south Asian nations. (IANS)