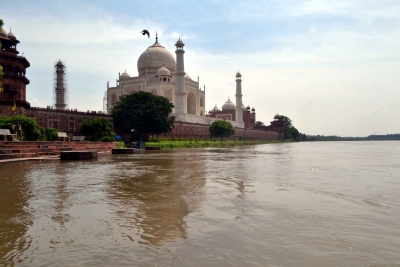 Agra– The holy Yamuna river in Sri Krishnas land or Braj Mandal (Agra, Mathura, Vrindavan) continues to run dry and polluted, despite the monsoon, a clear disappointment for lakhs of devotees ahead of the Janamashtmi on August 30.

“Yamuna is integral to the Sri Krishna-Radha-lore. For the Hindus, it is one of the holiest rivers. The Bhakti movement poets eulogized Kalindi (Yamuna). Even the Mughal rulers were fascinated by the majestic and resplendent Yamuna river. Almost all great monuments were sited on the banks of river Yamuna from Delhi to Agra,” said Goswami Nandan Shrotriya, priest of the 300-year-old Sri Mathuradheesh temple in Agra.

An angry green activist Devashish Bhattacharya fumed furiously at the continued callous neglect of the holy Yamuna. “Not only UP Chief Minister Yogi Adityanath, but also Prime Minister Narendra Modi and Union minister Nitin Gadkari had promised to take appropriate steps to rejuvenate and revive the ancient glory of Yamuna. Gadkari on three different occasions had assured that ferries would bring tourists from Delhi to Agra and the Yamuna would be cleaned. But the ground reality continues to remain depressing.”

In a series of interventions in the M.C. Mehta PIL on Taj Mahal pollution, the Supreme Court had stressed on not only cleaning pollution but also maintaining a regular flow of water in the Yamuna for the safety of the historical monuments. The National Green Tribunal too has on several occasions ordered uninterrupted minimum flow of water in Yamuna to cleanse pollutants and support aqua life, said Surendra Sharma, president of the Braj Mandal Heritage Conservation Society.

But successive governments have lacked the will needed to face the challenge of water pollution in the rivers. To further compound a grave situation, thousands of water bodies in the Braj Mandal have disappeared without a trace. The holy “kunds” of Braj have either vanished or grabbed by land sharks, say the locals.

A large number of these ponds had been resurrected and renovated by the Braj Foundation run by Vineet Narain but the Braj Teerth Parishad that the Yogi government set up to revive religious tourism in Mathura district, has not shown the passion to conserve these natural assets.

“The eco-degradation of the entire Braj Mandal, once known for its green pastures, mangroves, water bodies, animal life, is a pathetic tale of gross neglect and lop-sided priorities,” explains Jagan Nath Poddar, convener of the Braj-Vrindavan Heritage Alliance.

Some years ago, responding to a stern high court directive, the Uttar Pradesh government had formed a special force, the River Police, in Agra to ensure that people do not pollute Yamuna.

Restrictions were also imposed on bathing cattle in the river. Washermen were asked to shift downstream — but to no avail. The multimillion rupee Yamuna Action Plan seems to have gone haywire.

The Yamuna here lies reduced to a drain, far cry from the times when it formed an idyllic backdrop for the splendid 17th century Taj Mahal.

A barrage in nearby Mathura city has stopped water that used to flow down the river from the industrial areas of Delhi, Faridabad and Ballabhgarh, drying up the river.

According to an estimate, 70 per cent of India’s total surface water is polluted. The direct discharge of untreated sewage is one of the major culprits. Delhi alone generates more than 3 billion litres of sewage every day but is able to treat less than half of that, that too partially. The rest is dumped into the centuries-old river every day.

According to an expert, “India generates nearly 40 million tons of sewage daily of which more than 70 per cent goes untreated. More than 4,000 septage and sludge filled trucks empty in Ganga Basin alone and on average one such truck carrying 5,000 liters of fecal sludge dumped, equates to 5,000 people defecating in open.”

The sad part is that despite alarm raised from time to time, the Union government has so far not been able to draw up a comprehensive National Rivers Policy, nor constitute a Central Rivers Authority. For decades river activists have been screaming at the top of their voices, pleading with government agencies to release more fresh water in the 1,400-km long Yamuna to dilute pollution.

Green activists point out that hundreds of dirty drains opening into the Yamuna in Vrindavan, Mathura and Agra continue to pollute the river making the water unfit for human consumption. Just behind the Taj Mahal, garbage dumps have appeared. The Mantola drain, opening into the Yamuna, brings in untreated sewage and toxic waste from slaughter houses, chain industries, electroplating units. In Mathura, the Masani drain discharges huge quantities of sewage and waste water, without treatment, says activist Sunil Sharma.

Amid these dark clouds though there is a ripple of hope. Several voluntary groups including the Yamuna Mission in Mathura, are engaged in mobilising people to get involved in programmes for cleaning up of the Yamuna river. The Lok Sabha MP from Mathura, cine star Hema Malini, in a recent interaction with media persons said that Yamuna was her top priority. (IANS)