BOSTON- The Akshaya Patra Foundation USA’s Boston chapter will be holding its New England gala on Sunday, May 1st, 2022 at 5:00 pm at the Burlington Marriott Hotel in Burlington, MA.

Satyal, an Akshaya Patra veteran, has been a Master of Ceremonies for several Akshaya Patra events. Originally hailing from Cincinnati, Ohio, he is currently based out of Los Angeles and is considered to be one of the most versatile comedians today. He has opened for Indian Prime Minister, Narendra Modi and for comedic giants such as Russell Peters, Tim Allen and Dave Chappelle.

Batra serves as President & CEO, Waters Corporation and has received numerous accolades for his expertise in the healthcare & life sciences industries. Dr. Kewalramani is the recipient of several awards and under her leadership, Vertex was ranked #2 on The Commonwealth Institute’s Top Women-Led Businesses in Massachusetts in 2021. Mitzi Perdue is a businesswoman and the author of more than 1800 articles on family businesses, food, agriculture, the environment, philanthropy, biotechnology, genetic engineering and women’s health.

Around 450 business, non-profit, government, and philanthropic leaders from around the region are expected to support the organization’s dual mission of addressing childhood hunger & malnutrition and to promote education for underserved children in India. This year’s event will feature dinner and an evening of networking.

The 2022 annual New England gala, Feed to Educate, is made possible by the support of our valued sponsors and donors. They are listed below.

Established in 2000, The Akshaya Patra Foundation is the world’s largest NGO school meal program, providing hot, nutritious school lunches to over 1.8 million children in over 19,257 schools through 58 kitchens in 12 states and two Union Territories in India. It costs only $20 to feed a child for an entire school year. In 2006, the Akshaya Patra Foundation USA was formed as a 501(c)(3) nonprofit organization. The foundation is headquartered in Los Angeles, California and supports the Akshaya Patra mission by raising funds and awareness in the United States. 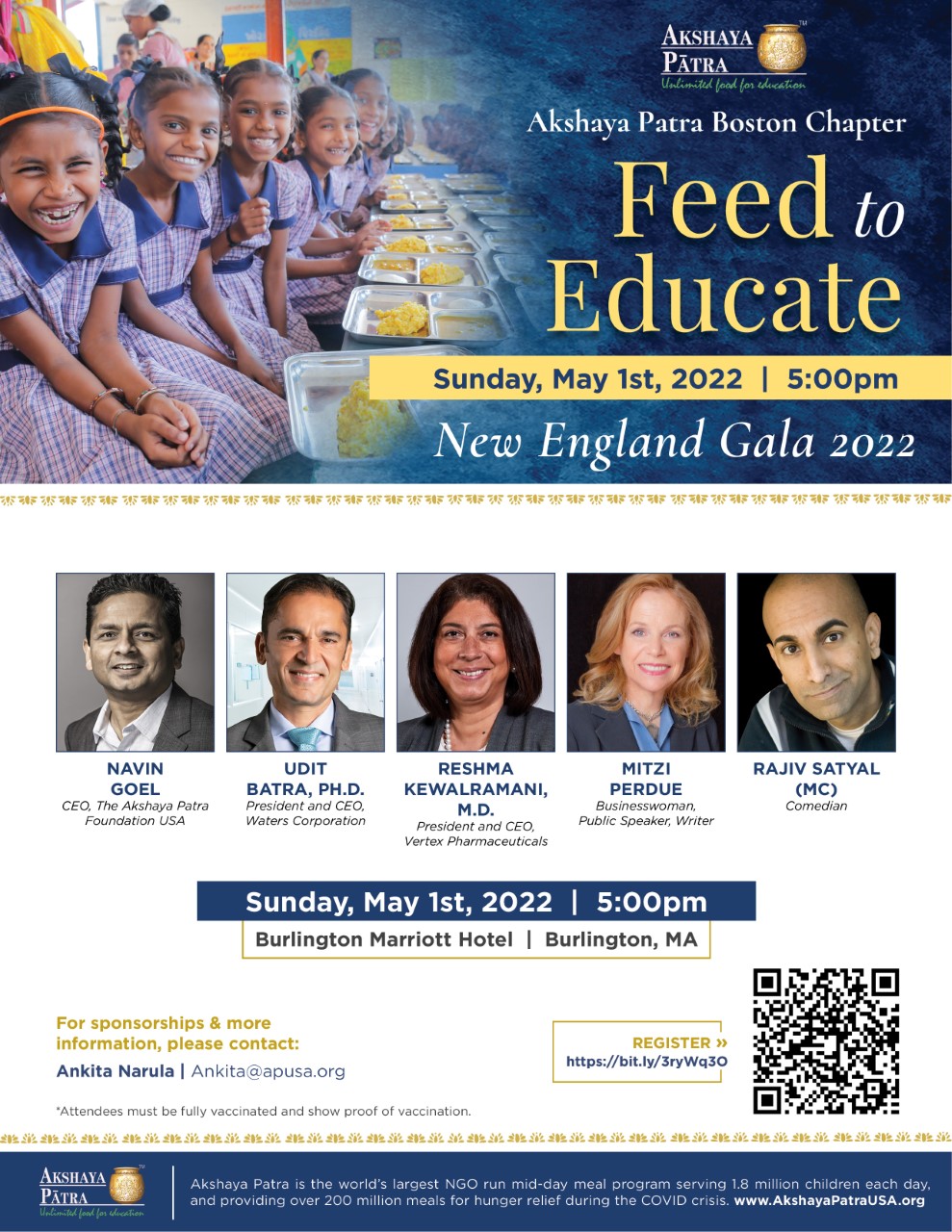