Chennai– In a decision that could redraw Tamil Nadu’s political landscape, superstar Rajinikanth on Sunday accused political parties of “looting” the people and vowed to form a new outfit to pursue “spiritual politics” and contest the next Assembly election.

After two decades of uncertainty, the 68-year-old bus conductor-turned-heartthrob of Tamil cinema told cheering fans here that his decision, which drew varying reactions from different political outfits, was a “compulsion of time”.

Alleging that politics in the country had gone “very wrong”, Rajinikanth said in Tamil: “Under the guise of democracy, political parties are looting their own people.” Such a system needed to be changed.

The hugely popular actor said his party — he did not name it — would not contest the upcoming local body elections due to lack of time to prepare but would field candidates in all the 234 Assembly seats in 2021. 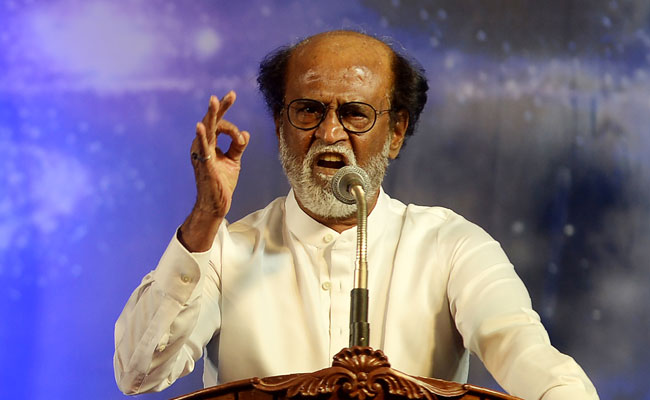 A decision on the 2019 Lok Sabha polls would be taken at an appropriate time, he said.

In a clear attack on the ruling AIADMK, Rajinikanth said the happenings in Tamil Nadu in the past one year — since Chief Minister J. Jayalalithaa died in December 2016, leading to splits in the party — had made the state a laughing stock.

He urged his legion of fans not to talk about politics or comment about other parties till his party was floated. Some said this could happen on Pongal day on January 14.

Born into a humble Maratha family as Shivaji Rao Gaekwad, Rajini — as he is popularly known — became a bus conductor after doing odd jobs as a coolie and carpenter.

Once he took to Tamil filmdom, there was no looking back. Tamil Nadu warmly embraced him, never seeing him as an “outsider”, and Rajinikanth became an icon in Tamil film industry, his movies running to packed houses.

The Rs 26 crore deal he signed for the movie “Sivaji” (2007) then made him the highest paid actor in Asia after Jackie Chan. For his fans, he was a demi-god.

On Sunday, Rajinikanth said his first task would be to get many of his unregistered fan clubs affiliated with the parent body.

He underlined that he was not getting into politics for the greed of power. He was not interested in political power at age 45 and, so, there was no question of he having the desire now.

Rajinikanth admitted that in a state with a plethora of political parties, it would be no easy task to float a new one. “It is like taking a pearl from the deep sea.”

He promised that his party, if elected to power, would resign if it was not able to fulfil the electoral promises within three years of forming a government.

Advising his fans to “think good, talk good and do good”, Rajinikanth said his party’s philosophy would be “Truth, Work and Growth”.

He said he was confident of getting people’s support as he represented the common man.

For years, Rajinikanth has been asked repeatedly if he would take to politics or not. At one time he supported the Congress but backed out when it aligned with the AIADMK. He then backed a DMK-TMC alliance which won.

He also lent his support to the Anna Hazare campaign against corruption in 2011.

Rajinikanth’s entry into politics was welcomed by most parties. Chief Minister K. Paliniswami was cold while DMK leader M.K. Stalin said his party’s fortunes won’t be hit by the actor. The BJP hoped Rajinikanth would back the BJP in the 2019 Lok Sabha polls.

The winner of several film awards as well as Padma Bhushan (2000) and Padma Vibhushan (2016), Rajinikanth is known for his philanthropic activities and spiritual pursuit.

He was wedded to the spiritual path at a young age when his family helped him to join the Ramakrishna Math. He is known to regularly visit pilgrimage hubs across the country and many temples in Chennai and elsewhere.

Son of a former police constable and a father of two grown up daughters, Rajinikanth joins the long list of Tamil actors who have taken to politics — some very successfully at that.

They include the iconic M.G. Ramachandran or MGR, his protege Jayalalithaa, MGR’s contemporary Sivaji Ganesan, MGR’s wife Janaki and action hero A. Vijaykant.

DMK stalwarts C. Annadurai and M. Karunanidhi — both former Chief Ministers — wrote scripts for Tamil movies. And actor Kamal Haasan has said he too will take to politics. (IANS)