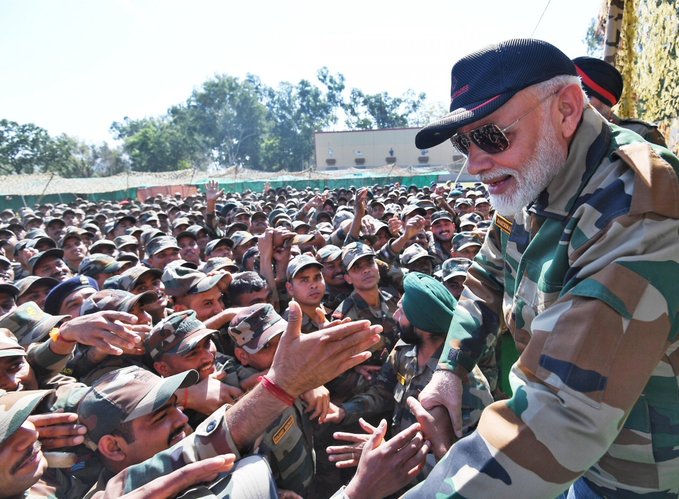 Rajouri– Prime Minister Narendra Modi celebrated Diwali with soldiers of Indian Army at Line of Control in Rajouri District of Jammu and Kashmir on Sunday.

This is in continuation with the tradition set by Prime Minister himself. This is the third time he has celebrated Diwali with the real heroes in Jammu and Kashmir.

Modi visited the “Hall of Fame” in Rajouri where he paid homage to the soldiers and citizens, who laid down their lives to protect Rajouri and Poonch sectors. PM termed the Hall of fame as “Parakram Bhoomi, Prerna Bhoomi, and Paavan Bhoomi “.

Modi, while addressing the soldiers, said that everyone endeavours to travel far and wide to celebrate the festival of Diwali with family members and likewise he too travelled to be with the members of his family, the brave Jawans of the Armed Forces.

Prime Minister recalled the valour and supreme sacrifices made by the Armed forces in October 27 1947, which is also celebrated as infantry day.

Prime Minister also listed the steps being taken by the Government to further strengthen and modernize the Indian defence forces. He added that the Government is committed to taking steps to ensure the welfare of soldiers.

To pay homage and mark their contributions, the government endeavoured to engrave the landmark National War Memorial in the Capital, the Prime Minister said adding that the increasing number of visitors to the Memorial shows the respect accorded by the citizens towards the contributions of armed forces. (IANS)