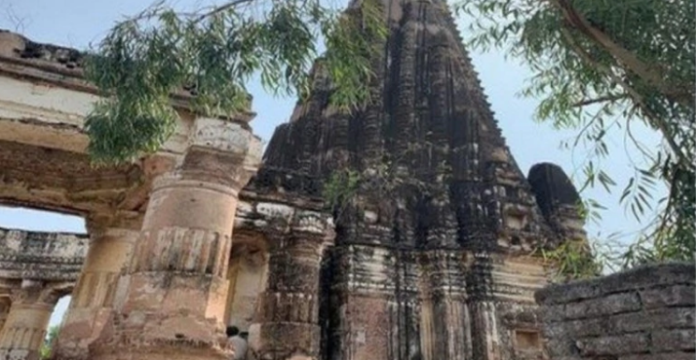 Sialkot, Pakistan– Diwali was celebrated at a Lord Shiva temple here which was re-opened and re-consecrated recently after remaining closed since 1947, reports said.

Ahead of the festival, the Shawala Teja Singh Temple, renovated at a cost of (Pakistani) Rs 5 million, was formally inaugurated on Friday night by Evacuee Trust Properties Board (ETPB) Chairman Aamer Ahmed.

Located in Sialkot’s congested Circular Road, the granite-sandstone temple had long been neglected, leading to the intricate carvings on the outside pillars fading or vandalised, and likewise the sacred idols of Lord Shiva had also gone missing.

However, under the renovation, a boundary wall has been constructed as the perimeter of the building and doors have also been refitted. Idols were brought from other temples in Pakistan and India and consecrated.

Pakistani officials, however, say that complete restoration would take up to five years, for which UNESCO and the Karachi-based Aga Khan Foundation have been taken on board.

According to ETPB Punjab official Saiyyad Faraz Abbas, the government has provided grants to this temple, the Krishna temples in Rawalpindi and Lahore and other temples in Peshawar, Sukkur (Sindh), Karachi and elsewhere to celebrate Diwali. (IANS)