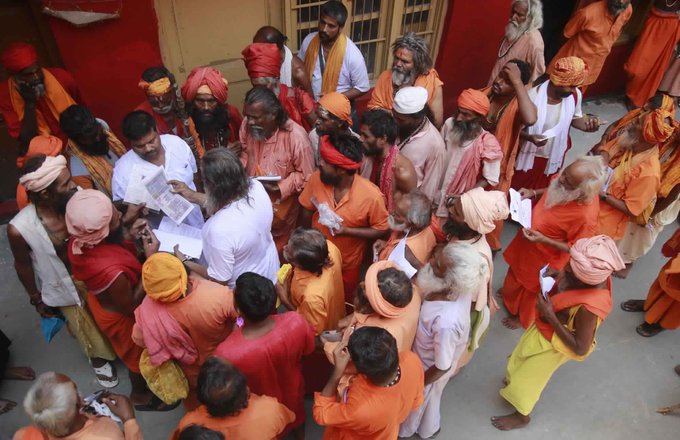 Jammu–Over one lakh pilgrims have performed the Amarnath Yatra during the last eight days as another batch of 5,964 yatris on Tuesday left Jammu for the Kashmir Valley, officials said.

To date, 1,11,699 pilgrims have performed the ongoing Yatra, officials said.

This year’s 45-day long Hindu pilgrimage to the Amarnath Cave shrine started on July 1 and will end on August 15, coinciding with the Shravan Purnima festival.

After remaining suspended on Monday due to law and order reasons, the movement of yatris was allowed on Tuesday.

“The pilgrims on Tuesday left Bhagwati Nagar Yatri Niwas in two escorted convoys. Of these, 1,967 pilgrims are going to the Baltal base camp while 3,997 are going to Pahalgam base camp,” a police officer said.

Helicopter services are available for the pilgrims at both the base camps.

Situated at 3,888 metres above the sea-level, the cave shrine houses an ice stalagmite structure that waxes and wanes with the phases of the moon.

After public demands, the curbs on the movement of civilian traffic on the Jammu-Srinagar national highway have been brought down to two hours daily.

Jammu and Kashmir Governor Satya Pal Malik has said these curbs are important for the safety of the pilgrims.

Local Muslims have always lent a helping hand to their Hindu brethren so that they perform the Yatra with ease and convenience.

In fact, till early 1980s, the Amarnath Yatra has mostly remained confined to Kashmiri Pandits and Sadhus.

The cave shrine was discovered by a Muslim shepherd — Buta Malik — in 1850.

His descendants benefited immensely from the discovery as they received a portion of the offerings at the Cave shrine for over 150 years. (IANS)