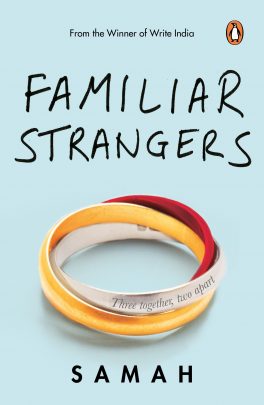 New Delhi–Flick through a debut novel that weaves a narrative around the changes in ones life with the arrival of a stranger; read the tale of a curious but mischievous child and his tryst with a teacher who is hell bent on setting him right; and finally relive a play that tells the story of the Bengal famine.

The IANS bookshelf has all this on offer for its readers this weekend.

Priya and Chirag are like several other modern couples, living life at breakneck speed, unknowingly stuck in the rut of a marriage that is obviously dying, if not already dead. But things start to change when Priya’s position in Chirag’s life is threatened by his past — his ex-girlfriend, who returns when they least expect it.

A third person’s entry into their marriage awakens emotions that have been dormant for too long. But is it too late? Is the damage beyond repair?

2. Book: The Globetrotters; Author: Arefa Tehsin; Publisher: Puffin India; Pages: 199; Price: Rs 199
Hudhud is horrible to everyone. He polishes off his classmates’ lunches, plays cruel pranks on his teachers and troubles innocent creatures. Until his strange new history teacher decides to set him straight.

The lesson? A curse! Now Hudhud must roam the vast earth. His goal? To find the answer to all wrongs. And so begins Hudhud’s remarkable journey: As a blue whale calf separated from his mother in the deep; as a trusting caterpillar who befriends a hunting spider; as a competitive caribou on a perilous trek; as an Arctic tern too scared to fly.

But fly across the world he must, if he hopes to ever return home. Follow Hudhud on this surreal trip, through the Arctic Ocean and the Sahara Desert, among fragrant flowers and tall grass, and find out all about the inner lives of some majestic animals and the wonders of the wild.

3. Book: Nabanna; Author: Bijon Bhattacharya; Translator: Arjun Ghosh; Publisher: Rupa; Pages: 202; Price: Rs 295
During the relief efforts in the wake of the Bengal famine the Indian People’s Theatre Association (IPTA) created “Nabanna” — a play that tells the story of the villagers of Aminpur.

The Sammadar family is already battling extreme food shortage, starvation and high-handedness of land sharks, when a tidal wave destroys their crops, homes, hopes and everything. In the desperation to survive, they are forced to walk to Calcutta (now Kolkata). But their hope of help from the Calcutta middle-class is soon dashed by the apathy and lack of preparation that they encounter. They return to the village and resolve to counter their fate with a new strategy.

“Nabanna” is a watershed in the history of the Indian stage on several counts. It marks a break from the commercial stage and the inception of an activist, amateur theatre. It transcended the limitations of the naturalistic stage to make way for a versatile décor which added pace to the episodic action. This book includes a critical introduction, which traces the context and significance of Nabanna and testimonies by important figures of the first performance of the play. (IANS)