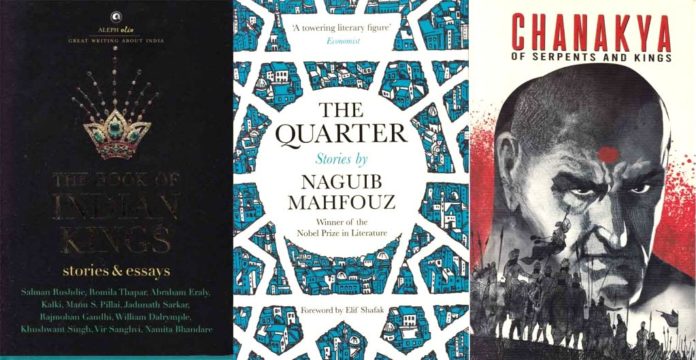 New Delhi–Read about Indian kings from the hoary past to the present, delve into in a refreshing new take on Chanakya and finally immerse yourself in some unpublished stories of Egyptian Nobel laureate Naguib Mahfouz.

The IANS Bookshelf offers you a wide variety this weekend. Read on!

Sometimes, the smaller the better as this slim volume proves, packed with essays and stories of 10 Indian kings, beginning with Ashoka and ending with Madhavrao Scindia, by some of the country’s finest writers.

All of these stories have previously been published in various forms – most of them as full-fledged books – but what makes this volume priceless is that it distils the best of what the originals offered and presents them in a concise and easy to read form.

One of the meanings of the word ‘Olio’ is ‘a miscellany. To this end, the books in the Aleph Olio series contain a selection of the finest writing to be had on a variety of Indian themes – presenting the country in ways it has seldom been seen before.

Graphic novels are playing an increasingly important role in connecting millennials, as also adults with only a nodding sense of history, with India’s magnificent past which would otherwise have been lost to them.

“Chanakya – Of Serpents and Kings” – performs this task admirably as it provides a glimpse into one of the most brilliant minds of ancient India. Philosopher, economist, strategist and author of the political treatise, the “Arthashastra”, Chanakya was a multifaceted personality – indeed India’s Machiavelli long before there was a Machiavelli.

Painstakingly illustrated in great detail – and in stark black and white – the book guides you in the effort to answer the question: Is all truly fair in war? Where does one draw the line between right and wrong, ethical and unethical?

It’s definitely a book that will make you think hard about the way you’ve lived your life and provide lessons for the road ahead.

The Guardian Newspaper has described Naguib Mahfouz, the first writer in Arabic to win the Nobel Prize in Literature (1988), as “A master of detailed realism and fabulous storytelling”. British historian, TV presenter and author Simon Sebag Montefiore has termed him “The Arab Tolstoy”.

Reading “The Quarter” makes you understand why. It’s a collection 18 unpublished stories by Mahfouz that came to light in September 2018 when Egyptian academic Mohamed Shoair stumbled across a handwritten manuscript of 50 stories by the author with the attached label: For publishing 1994.

Sample this about a woman named Tawhida: “Tawhida, you were the crown jewel (in the house you lived in…All praise to the One who created and formed you in the loveliest guise! Your beauty was peerless, although the vestiges of it that live in my imagination are far more vivid than the ones in my actual memory…Even though I was still very young, I was intoxicated by her rosy complexion, her black hair, and the sweet tone of her voice, which we all tried happily to imitate”.

Mahfouz was born in Cairo in 1911 and began writing when he was 17. A student of philosophy and an avid reader, his works range from reimaginings of ancient myths to subtle commentaries on contemporary Egyptian politics and culture. Over a career that lasted more than five decades, he wrote 34 novels, 13 short story anthologies, numerous plays and 30 screenplays. He was a writer of incredible discipline and every day wrote for one hour, smoked three cigarettes and walked by the Nile.

The year 1994 was a very difficult one for Mahfouz. The publication of “The Satanic Verses” brought with it unwanted attention from Islamic extremists, who despite police protection, succeeded in stabbing the 82-year-old novelist in the neck outside his home in Cairo. Mahfouz survived, but the nerves in his right arm were permanently damaged and he could no longer write for more than a few minutes a day. As a result, he dictated most of his stories. For the last decade of Mahfouz’s life most of his work were short narratives, such as “Echo of An Autobiography” and “Dreams”.

Mahfouz’s most famous works in English are “The Cairo Trilogy”, “The Children of Gebelawi”, “The Thief and the Dogs” and “Autumn Quail”. He died in August 2006.