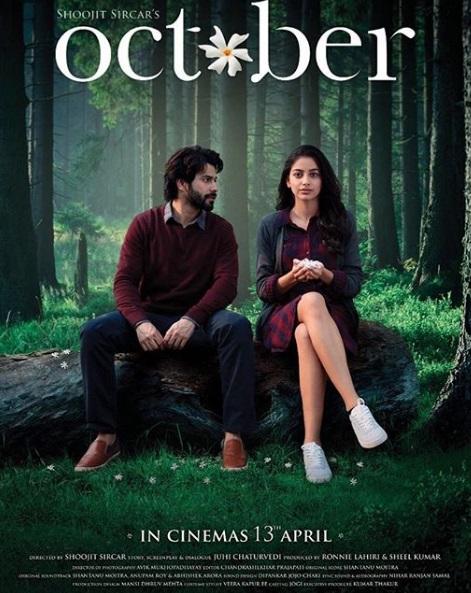 Director Shoojt Sircar’s “October” is a poignant tale about love and hope, where Shiuli or night Jasmine flowers, which are perfumed and spread their fragrance everywhere and abound in autumn, is cleverly used as a metaphor to denote the ephemeral nature of life.

Danish Walia or Dan (Varun Dhawan), as he is fondly called is a hotel management intern at a five star hotel in Delhi, who is known for his brusque and self-assured ways.

Always dreaming of something big, he dislikes the menial chores assigned to him and is irresponsible and undependable. His friends, who are his colleagues at work, including Shiuli Iyer (Banita Sandhu) and Manjeet, often cover up for him and save him from trouble.

A chance accident which lands Shiuli Iyer in hospital, results in the uncaring and indifferent Dan transform into a new person. His whole life revolves around ensuring that Shiuli recovers and he inadvertently becomes a pillar of strength for her family, especially her mother Prof Iyer (Gitanjali Rao).

Although the pace of the film is painfully slow and a large chunk of it is based in a morbid setting — a hospital, it is completely devoid of melodrama.

Nowhere in the film is there a romance spelt out yet, the underlying love and longing makes it stand apart.

The film appears unhurried, but does not seem jarring, as it complements the flavour of the narrative.

Writer Juhi Chaturvedi skilfully injects humour through the witty dialogues — whether about varicose veins or wrongly laundered underwear, mostly mouthed by the brash and tactless Dan, thus never allowing monotony to set in.

Each character is well-etched and fits snugly into the plot, which flows smoothly. Although seemingly predictable, the end brings with it an unexpected twist which sums up the film succinctly.

Varun Dhawan excels as Dan and the metamorphosis of his character without seeming overly emotional or mushy, is well-written and astutely handled by him as an actor.

He is infuriatingly lazy and cocky in the first half as he is caring and inquisitive about Shiuli’s treatment in the second.

Sardonic barbs and cheeky lies, come naturally to Dan and Varun Dhawan becomes Dan with ease. Less is more, is his mantra throughout his restrained portrayal of Dan.

Shiuli Iyer played by Banita Sandhu is a character you empathise with. She is effective in her body language and expressions, albeit on the hospital bed.

Gitanjali Rao as Prof Iyer, Shiuli’s mother leaves a strong impact through her portrayal of a distraught, but strong mother who conducts herself with unflinching poise.

The other character actors too lend able support and essay their roles with credibility and sincerity.

Shantanu Moitra’s soul-stirring background score enhances the emotional quotient of the narrative, while cinematographer Avik Mukhopadhyay presents autumn and its hues magnificently through his lens and captures the Delhi fog with equal panache.

“October” may not be your typical action or entertaining film, but the fragrance of the characters and their lives lingers long after you leave the theatre.