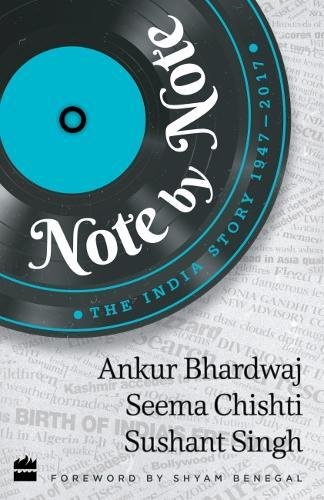 The book has many popular Hindi film songs populating its pages, interwoven with the story of Independent India. Whether it’s an upbeat “Gore gore, o banke chhore” of 1950, or a “Papa kehte hain bada naam karega” laden with the youthful energy of the 1980s, or even a more sombre “Aye mere pyare watan” from the early 1960s, “Note by Note: The India Story 1947-2017” encapsulates the country’s story since its birth using popular Hindi songs.

It weaves a melodious narrative right from her cradle to the wars she fought, and takes the readers on a journey through the troughs and crests of democracy, ultimately leading to the India that is today.

But calling it an anthology of the best Hindi songs would be selling it short. The book’s 71 chapters speak about the 71 years of independence. It offers to bring to the surface forgotten memories of the Indian story — one year, and one song at a time.

The list of contents is tempting, often nostalgic, and even leaves the reader humming an old tune or two on several occasions. At the same time, one is also introduced to its claims to delve deep into India’s seven-decade travelogue, or, as the book says, “a rhythm of modern Indian history played to the beat of Hindi film music”.

For a number of years, the chosen “anthem” songs fit the ongoings like a jigsaw puzzle piece.

An iconic song from a landmark film — “Pyaar kiya toh darna kya” from “Mughal-e-Azam” — makes the case for 1960, a year prior to which saw the famous K.M. Nanavati vs State of Maharashtra court case, which later inspired movies like “Achanak” (1973) and “Rustom” (2016).

For a more recent example, the book’s pick for 2016 is “Haanikarak Bapu” from the film “Dangal”, and has been placed in the context of the “haanikarak” (adverse) step taken on the night of November 8, 2016 — the demonetisation of Rs 500 and Rs 1,000 currency notes.

In some places, however, the reader might find the link between the chosen song, and the year it is picked for, to be weak, where a more nuanced explanation could have done the trick, as it does in other chapters.

Take, for instance, 1991. “Note by Note” presents “Dekha hai pehli baar saajan ki ankhon mein pyaar” as the song of a year with significant political action. As it itself offers as facts, it was the year when India’s economic reserves were crashing, former Prime Minister Rajiv Gandhi was assassinated by a suicide bomber, and the country’s liberalisation and globalisation phase had just set off.

The chapter offers an explanation by saying the hook line — “Dekha hai pehli baar” — applies to the first televising of war, referring to CNN live-broadcasting Operation Desert Storm in Iraq via satellite TV.

As filmmaker Shyam Benegal points out in his four-paragraph foreword, the Hindi film song has been used as “punctuations between scenes and sequences; to highlight or to anticipate a turn in the plot”.

But, all the 71 songs that feature in the book do not necessarily coincide with political and social upheavals that the country saw in a given year. For those looking for an ensemble of songs capturing India’s story, this book will only be a starting point in their search, not an end of it. (IANS)