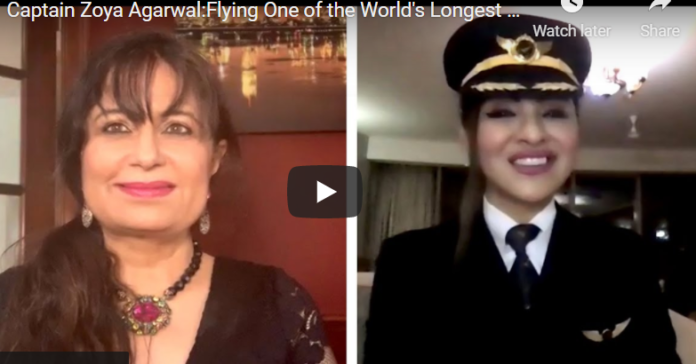 BOSTON—In 2013, Zoya Aggarwal made history when she became the youngest woman to pilot Boeing 777, the wide-body airliner and the world’s largest twinjet.

On Jan. 9th of this year, Captain Aggarwal was the member of an all-women cockpit crew that flew India’s national carrier Air India’s first flight from San Francisco to Bengaluru. Her other crew members were:  Capt. Papagari Thanmai, Capt. Akansha Sonaware and Capt. Shivani Manhas.

In an exclusive trailblazer video interview series on Chai With Manju, Capt. Aggarwal says there was once a 8-year-old Zoya who would gaze stars and watch planes flying and would wonder if she herself could fly those planes.

Although she calls herself a “normal” girl, but she is already changing lives of millions of 8-year-olds by inspiring them to achieve their dream.

What is her mantra?

“Stay focused and follow your dream,” says Capt. Aggarwal, adding that impossible is not a word. It is “I am possible,” she adds.

To watch the full interview, please click here or on the image below: