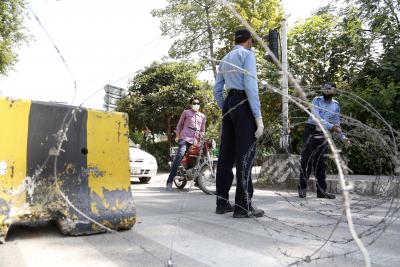 New Delhi– The Embassy of North Korea in Islamabad has lodged a protest with the chief of the Pakistani capital city’s police over a raid at its premises earlier this week, saying the incident was a violation of the Vienna Convention, Dawn new reported.

In a letter on Wednesday addressed to the Inspector General of Islamabad Police, the Embassy said seven police personnel including a woman, made an “unlawful entry” into its premises on Monday.

“The mission staff reminded them that the premises of the embassy are sovereign territory of DPRK and asked them to immediately stop this brutal act,” it said.

“But the police ignored the request, searched the storerooms at the backyard on the pretext of seizing some items and threatened the staff with guns.”

DPRK stands for the Democratic People’s Republic of Korea, the official name of the North.

The police officials damaged the door and broke into a room in the basement, Dawn new quoted the letter as saying.

The Embassy further alleged that “some external force” must have been behind the raid.

“The Embassy of the DPRK expresses its serious regrets on this incident and requests (Pakistan’s) Ministry of Foreign Affairs and security organisations to undertake a thorough investigation against those involved and take measures to prevent recurrence of such incidents.”

A source at Shalimar police station said the raid was carried out after a tip-off that a “huge quantity of liquor” was present at the embassy.

The IGP has asked a Senior Superintendent of Police to conduct an inquiry and submit a report within three days. (IANS)