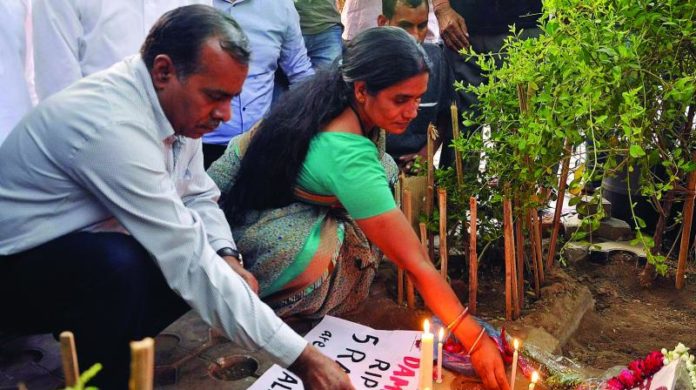 New Delhi– Seven years after it shook the nation, the brutal December 16, 2012 gang-rape case is back in the headlines with senior journalist Ajit Anjum claiming that the victim’s friend used to take money from various TV channels to recount the ordeal they faced that dark December night.

According to the journalist, he had come to know that the youth had, along with his uncle, decided to cash in on his account and used to charge Rs 1 lakh each from channels to appear on them. In order to expose the youth, Anjum had carried out a sting operation in September 2013, but subsequently decided not to air it.

Explaining the reason for not exposing the youth whom he had purportedly caught on camera taking money for appearing on TV, Anjum told IANS that “since the youth was the sole witness in the case, he had thought that exposing the youth by his sting operation would weaken the impact the case had on the nation.”

“The defence for the accused could also misuse it… For the media, journalistic values, editorial prestige and sensitivity are more important than TRPs,” he added.

However, the recent Netflix series “Delhi Crime”, which is based on the horrific incident, disturbed Anjum when he saw it and led him to change his mind and disclose the secret.

On October 11, Anjum had posted a series of tweets in Hindi, hinting at some sensational disclosures about the companion of the December 16, 2012 victim.

In one tweet, he wrote: “The incident is of September 2013. A fast-track court had pronounced the death sentence on Nirbhaya gang-rape convicts. There was coverage of the Nirbhaya case on every channel. At that time I was the managing editor of ‘News 24’. Nirbhaya’s friend was recounting the details of the gory incident on several channels.

“I was seeing him on TV regularly. But I never saw any pain in his eyes. I also gave my reporters the responsibility of bringing him to our own studio. After some time I was told that Nirbhaya’s friend, along with his uncle, goes to various studios and takes thousands of rupees for appearing.

“At first I did not believe it. Then I felt rage at him. I decided to conduct a sting showing Nirbhaya’s friend demanding and taking money and broadcast it to expose him. I put myself in his place and thought, ‘when the shrieks of his friend being tortured by those beasts would ring in his ears, would he take money to recount that?’

“I was confounded that when his friend, gang-raped and tortured in front of him, had departed the world, he was making ‘deals’ with channels to tell this disturbing story?

“My reporter talked to the youth’s uncle over phone in my presence. He (the uncle) demanded Rs 1 lakh to come to the studio. After some bargaining, it was fixed at Rs 70,000. I then thought is it possible that the uncle is making money out of his nephew? I wanted the money to be given in front of the youth.

“The sum of Rs 70,000 was kept before Nirbhaya’s friend. A secret camera was recording the scene. Then he was taken to the studio. After 10 minutes of conversation, he was asked if he was taking money to recount that gruesome account on various channels?

“We thought we will first record the show, and then decide what to do with it. The youth continued to deny the allegation of taking money, and then he was shown the ‘sting’ footage and he lost all composure and in front of cameras, and made an apology.”

Anjum also told IANS that after he warned the youth that the sting footage would be telecast if he appeared on any more channels, the youth was never seen on air again. (IANS)