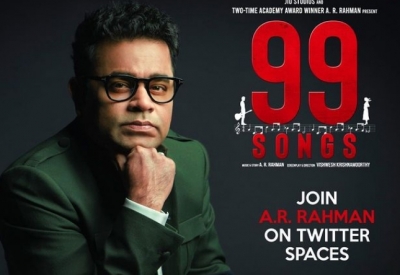 Mumbai– Composer AR Rahman’s debut project as film producer, “99 Songs”, will have its digital premiere on May 21. The Oscar-winning composer tweeted the news on Wednesday evening.

“Here’s the announcement that will lighten your mood. #99Songs will stream on Netflix,”announced Rahman in a short and sweet message on his verified Twitter account, @arrahman.

The musical romantic drama “99 Songs”, which stars newcomers Ehan Bhat and Edilsy Vargas, is directed by debutant Vishwesh Krishnamoorthy, who is also a musician with the Mumbai-based hardcore experimental band Scribe.

The film had released theatrically on April 16 but did not see much business owing to the ongoing pandemic, which kept the audience away from theatres during the unlock phase.

“99 Songs” will stream in Hindi, Tamil, and Telugu on Netflix. (IANS)