About 400 entrepreneurs, corporate executives, philanthropists, educators and community leaders will attend the New England Choice Awards gala, which is presented annually by the INE MultiMedia in collaboration with the INDIA New England News, the region’s oldest and largest online, print and video magazine serving the South Asian community.

INE received over 200 nominations for these awards. A jury of 14 individuals selected the final winners. To read about the members of the jury, please click here.

“We are looking forward to celebrating the extraordinary achievements and contributions of some very special people from our community on October 26. It is a true privilege to honor those who work at the grass roots tirelessly and have selflessly served our community for decades and also the trailblazers who have made an enormous impact in making the world a better place,” said Dr. Manju Sheth, MD, creator of NECA Awards and CEO of INE MultiMedia, a Waltham, MA-based (501c-3) non-profit organization devoted to promoting and supporting charitable organizations, art, culture, education and empowerment.

“We are in a better place in the world today because of the hard work and dedication of these outstanding individuals and organizations. Thanks to their passion for what they do, we are inspiring new generations of leaders to follow their path,” said Mr. Mishra. “We are very grateful to their peers for nominating so many champions of our community for the New England Choice Awards.”

Chair of the Department of Physics

Prof. Sachdev’s research describes the connection between physical properties of modern quantum materials and the nature of quantum entanglement in the many-particle wavefunction. He has worked extensively on the description of the diverse varieties of entangled states of quantum matter. These include states with topological order, with and without an energy gap to excitations, and critical states without quasiparticle excitations. Many of these contributions have been linked to experiments, especially to the rich phase diagrams of the high temperature superconductors, according to his official bio.

He has received numerous awards, including Dirac Medal from International Center for Theoretical Physics (2018); Lars Onsager Prize, American Physical Society, 2018; Star Family Prize for Excellence in Advising, Certificate of Distinction, Harvard University, 2016; and Dirac Medal for the Advancement of Theoretical Physics, the Australian Institute of Physics, the University of New South Wales, and the Royal Society of New South Wales, 2015, among others.

Creative Director and core vocalist, Women of the World

In 2003, she founded Artistes Unlimited in New Delhi, one of India’s largest and most diverse performing arts collective. Now based in Boston, Philip is the Founder-Director of Berklee’s immensely popular Indian Ensemble.

She is also Creative Director and core vocalist of the award-winning international a cappella quartet, Women of the World, who were the 2014 USA National Acapella Champions. With members representing Japan, Italy, India, Haiti and the US, Women of the World currently performs in 31 languages, and is committed to uniting global voices through song.

SETU is a non-profit theater group in the Boston area. SETU means “bridge” in several Indian languages and its mission is to build bridges between Indian and Western cultures through the medium of theater.

SETU selectively produces plays in English to project the ways of life in India in a global context. India has rich and diverse tradition in drama beginning from ancient times by Sanskrit playwrights. Indian theater has found expressions in diverse forms from folk theater to musicals to modern drama forms. SETU attempts to present some of these in the contemporary context and, in the process, create a better appreciation of India’s heritage and culture.

SETU has staged several successful productions in the past, some being “Rape, Regret and Retribution”, “Hayavadana”, “Shah Jahan”, “Mahabharata”, “Once Upon a Time NOT in Bollywood”, “Ramayana” and “Kamala”.

Mr. Shah is co-founder and CTO of HubSpot. Prior to founding HubSpot in 2006, he was founder and CEO of Pyramid Digital Solutions, which was acquired by SunGard Data Systems in 2005.

In addition to co-authoring “Inbound Marketing: Get Found Using Google, Social Media and Blogs”, Mr. Shah founded and writes for OnStartups.com — a top-ranking startup blog and community with more than 700,000 members.

In 2013, he published HubSpot’s Culture Code, which has garnered nearly four million views on SlideShare. Named an Inc. Founders 40 in 2016, he is an active member of the Boston-area entrepreneurial community, an angel investor in over 60 startups, and a frequent speaker on startups, inbound marketing, and company culture. Mr. Shah holds a BS in Computer Science from UAB and an MS in the Management of Technology from MIT.

Early supporter of Shishu Bharati; Serving for about 40 years as director, secretary and now treasurer.

Forty years ago, a group of like-minded people founded Shishu Bharati. Mr. Jinwala joined the organization, since then for past 40-years he has been diligently working in various capacities such as director, president, secretary, treasurer and Gujarati teacher. He has been a mentor for hundreds of volunteers, teachers and students.

Mr. Jinwala was also the co-owner of India Tea & Spices, the first Indian grocery store in Boston. He has also been a supporter of many events, bringing the first ever musicians and singer such as Mukesh and Lata Mageshkar to Boton.

Shishu Bharati, a non-profit school located in Lexington and Walpole in Massachusetts and Nashua in New Hampshire, offers a broad spectrum of educational programs in the languages and culture of India for students of all ages.

The school’s objective has been to develop a sense of well-informed cultural pride in students by introducing them to Indian arts, customs, languages, religion, history, geography, and current events. We are very proud to note that with the help of limited resources, the community’s aspirations have so far been exceeded. The school currently has about 900 students, 120-plus teachers, and about 200 volunteers. With the “Class of 2018”, on June 17th, Shishu Bharati celebrated the 30th graduating class.

Dr. Chopra is a physician and author of several books on health and happiness. He is Professor of Medicine and served as Faculty Dean for Continu­ing Medical Education at Harvard Medical School for 12 years. He serves as a Marshall Wolf Master Clinician Educator Brigham and Women’s Hospital.

Dr. Chopra has more than 150 publications and nine books to his credit. Dr. Chopra is Editor-in-Chief of the Hepatology Section of UpToDate, the most widely used electronic textbook in the world subscribed to by more than 1.2 million physicians in 195 countries. He is a sought after inspirational speaker across the United States and abroad, addressing diverse audiences on topics related to medicine, leadership, happiness, and living with purpose.

He has received numerous rewards, including: In 2003, The American Gastroenterological Association Distinguished Educator Award. He has written nine books including: Dr. Chopra Says  Medical Facts and Myths Everyone Should Know (With Allan Lotvin, MD); Live Better, Live Longer; The New Studies That Reveal What’s Really Good and Bad for Your Health; Leadership by Example: The Ten Key Principles of all Great Leaders; His brother Deepak and he wrote a double memoir: “Brotherhood: Dharma, Destiny and the American Dream,” published May 21, 2013; The Big 5 Five Simple Things You Can Do to Live a Longer, Healthier Life; The Two Most Important Day by Sanjiv Chopra and Gina Vild. 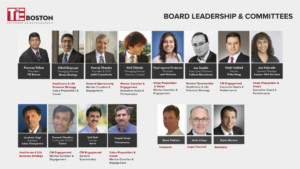 Founded in 1997 by entrepreneurs who immigrated from the Indus region, TiE Boston helps innovators and enthusiasts from all backgrounds. TiE Boston’s core strength comes from its charter members — innovators and business leaders who have led, scaled, and exited their own companies. They are deeply engaged and committed to giving back to the TiE Boston community by providing mentorship, tactical advice, and expertise to rising entrepreneurs.

TiE Boston has built a network to guide and connect entrepreneurs with each other and with other stakeholders in the ecosystem, including seasoned entrepreneurs, angel investors, venture capitalists, service providers, and early customers.

TiE-Global, the largest global not-for-profit organization fostering entrepreneurship. TiE has 12,000 members throughout the world, and has contributed more than $250 billion in wealth creation.

Mr. Desai is the founder of The Desai Foundation, which empowers women and children to elevate health and livelihood in India and the United States. The Foundation focuses on sustainable development with programs spanning from vocational classes, health camps, community volunteer outreach, and sanitary napkin programs all for women in need. The organization, to date, has impacted 380,000 women’s lives in Gujarat, India, Metro-Boston, and Harlem, New York.

When founded in 1997 as a family foundation, the it had one simple goal: to serve the communities that had served them. Mr. Desai, a technology entrepreneur, focused the organization’s efforts in Metro-Boston, MA, Morningside Heights & Harlem, NY and south Gujarat, India. The support went to organizations focused on health, education and Indian culture.

Miriam George is a student of political science and Hispanic studies. Ms. George, who is passionate about the protection of the civil rights and liberties of minority and immigrant groups, particularly in the realm of employment, hopes to work as an attorney in the field of civil rights law in the future.

In 2015, she worked for the Massachusetts Commission Against Discrimination, traveling around the city of Boston to give presentations to minority groups about the options available to them through the law when they feel they have been discriminated against.