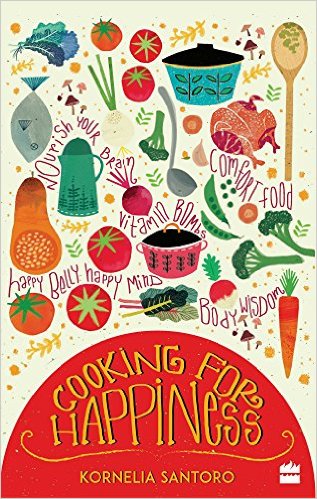 Panaji–Biting into a chocolate truffle tickles the neurotransmitters in the brain as much as it may tantalise your taste-buds, Bavaria-born author Korenelia Santoro believes.

Her newly-released book, “Cooking for Happiness” is as much about cooking food as a meditative practice, as it is about letting comfort food trigger the right kind of bio-electrical impulses that can help you discover yourself better.

“Of course you can also turn eating into meditation. One of my favourite things is letting a chocolate truffle melt in my mouth while savouring the moment. As I state, happiness is a moment of bliss because feelings never last. Feelings are produced in the brain by nerve cells connecting and transmitting bio-electrical impulses. This is a process, not a state of being. That’s why we can never dwell in a happy state of mind for very long. Feelings come and go, they never last,” she contended.

“Depression is often caused by a lack or unbalanced levels of neurotransmitters in the brain. The only way to balance them is by proper nutrition. The blood-brain barrier, a membrane, protects the brain from big molecules. Unfortunately, it also keeps neurotransmitters out of the brain,” Santoro told IANS after the launch of her book here last week.

“You need to ingest all the necessary building blocks for neurotransmitters — proteins, minerals and vitamins — because only they can pass the blood-brain barrier. All neurotransmitters have to be synthesised in the brain itself. Only a well-nourished brain is a well-functioning brain; it is as simple as that,” Santoro explained.

Santoro has also pooled in the food experiences collected during her travels across the world in her book.

Born in Germany, lived in Greece, travelled through Asia and biked across India on a Royal Enfield, the journalist-turned-food writer said: “My travels influenced my way of cooking — and hence my way of writing recipes — since an early age. My kind of cooking has little to do with the traditional German cuisine that I grew up with. I have incorporated French and Italian influences from holidays during my childhood days.”

“I also love Greek dishes that I have come to know while living for two years in the country. Travels in Asia led me to appreciate Thai cuisine, that’s why I mention coconut curry in my collection of comfort foods. Of course, I also love a good, traditional Goan prawn curry.”

Settled in Goa for the last several years, Santoro has some advice for those living in the coastal state. Think red, and not white, when it comes to choosing the rice in your diet. And seafood, she said, with all its Omega-3 fatty acids, is excellent for neurotransmitter levels.

“Omega-3 fatty acids are vital for proper functioning of the brain. That means seafood is excellent for neurotransmitter levels. Goan people have a good reason why they cherish their prawn and fish curries. However, what is not so good is mountains of white rice. I would advise Goans to stick to the locally-grown red rice because it is delivering the B-vitamins that white rice is lacking in. A good supply of B-vitamins is important for synthesising neurotransmitters in the brain,” she said.

Cooking, said Santoro, is no less than meditation — if one cultivates the right sense of awareness.

“I do not attribute a zen-like quality to food. I state that cooking can be a kind of meditation, like everything else that you do with awareness. Cleaning and chopping vegetables can be done in a way that they turn into meditation — it is enough to focus on the action and to let thoughts pass through your brain. I have a lot of experience in meditation, Shambhala, Vipassana and other techniques,” she said. (IANS)