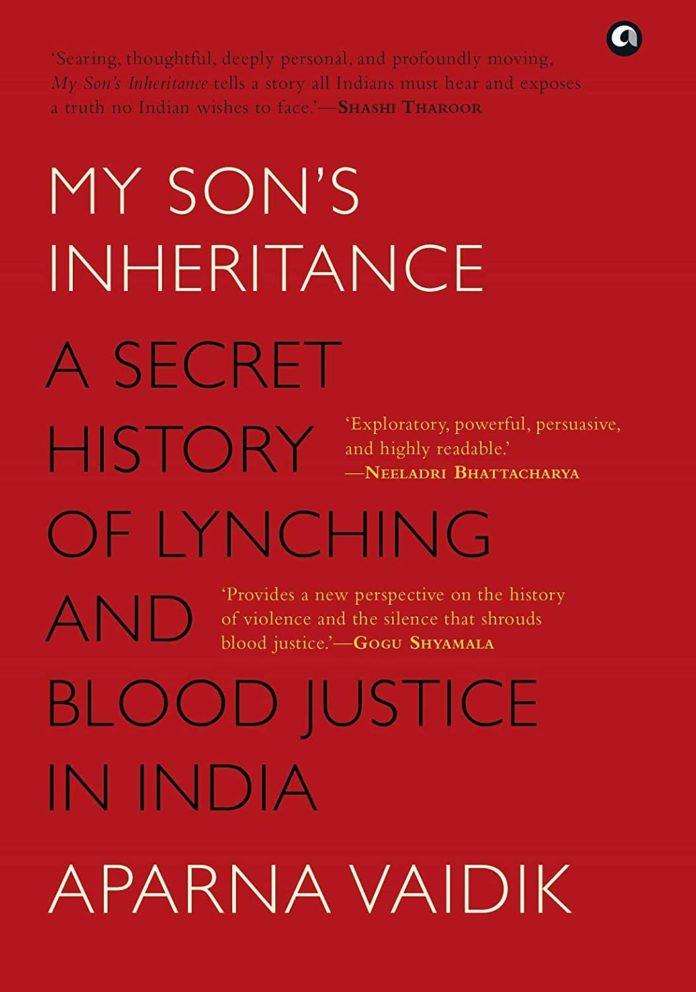 New Delhi– For generations, it has been drilled into Indians right from their school days onward that non-violence is the essence of the nation’s culture. Not so argues a new book by Aparna Vaidik, an Associate Professor of History at Ashoka University who has previously taught at Washington’s Georgetown University.

“The ones who invoked non-violence as India’s essence are not much different from the ones who emphatised with (Mahatma Gandhi’s killer Nathuram) Godse…The essence of Indian culture is also violence. Hinsa bhi tumhari dharohar hai. Violence is also India’s heritage that has been bequeathed from generation to generation. The history of intolerance is also one of tolerance towards violence,” Vaidik writes in “My Son’s Inheritance – A Secret History Of Lynching And Blood Justice In India” (Aleph/pp 173/Rs 499 ).

The perpetrators of this violence “have not always been the state, the rulers, the police or the army but also our silence. Our looking away from inconvenient truths, our blindness to our social privilege, and in our ability to pass on our unearned privilege as merit or advantages earned by hard work. It makes us either remain silent or glorify non-violence as our essence. This is how… we let our silence lynch our souls,” Vaidik writes.

The subtitle is slightly misleading in that the book deals more with violence versus non-violence than about lynchings, which he author largely ascribes to differences between two communities and

exacerbated during British colonial rule and by lumpen elements during the present day..

Framing her narrative as a message to her son, Vaidik acquaints him with his ancestors – those who aet and carry out lynchings as well as those who are lynched. In this way, her son embodies both the violator and the violated, much like the country in which he will come of age.

The author notes that if “myths anchor our present in the past, in which past was the notion that India was a land of non-violence anchored? Clearly the world of myths and what one knew of India wasn’t adding up. I wondered if our myths played a very important role that had hitherto been hidden.

“A role of normalising and invisibalising violence in its various forms – pejorative naming, erasure of personhood…robbing Ekalavya’s thumb, asking Karna for his kavach-kundal, all done in the name of maintaining the order of things. This was blood justice.

“Our gods kill only to raise the Other to the divine status. Violence inflicted by the gods doesn’t remain violence but becomes a narrative of redemption and liberation. Even violent battles and lynchings become dharmayuddha. Shrouded and concealed in religious myths, this was India’s secret history of blood justice,” Vaidik writes.

She also notes that noted social activist Mahatma Jyotirao Govindrao Phule, also known as Jyotiba Phule (1827-1890), from what is now Maharashtra, had attempted to lift the “iron weight of several generations of tradition and mental servitude.

“If there was anything that the tradition forbade, it was to ask a question. This tradition after all had come down to us through the great sages and was the repository of Indian civilisation. All was lost if you questioned it,” the author notes.

Still, Phule persisted, too irreverent a man to stop at just this question. He mocked the tradition, lampooned it and jeered at it.

“He was an iconoclast who tore down the entire edifice of Vedic learning. His pen ripped into the epistemic domination of ancient texts by turning it on its head. The Vedas for him were nothing more that Brahmanical mythology,” Vaidik writes.

Even so, violence continued to be “nurtured, sustained and rendered invisible by our myths that come in different garbs”, the author writes, adding that it is ironic that while Phule rubs shoulders with the likes of Raja Ram Mohan Roy as one of the builders of modern India and finds space in school textbooks, “his ideas were set aside”.

In all this, Vaidik concludes on an optimistic note as she addresses her son.

“Inheritance by definition, is not always of your choosing. But while you are tethered to it, you are in no way bound by it. You are free to choose the elements of your inheritance that you wish to own , to discard, to celebrate, to be indifferent to, or even to fight. You inheritance will acquire the meaning you give it,” Vaidik signs off.