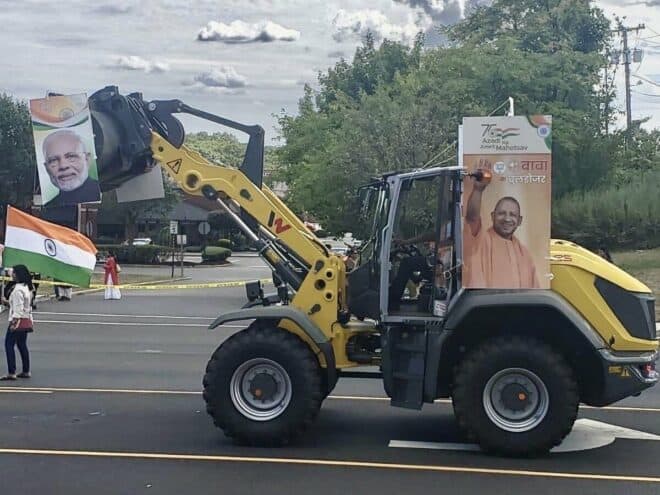 SOUTH PLAINFIELD, NJ– The New Jersey chapter of the Council on American-Islamic Relations (CAIR-NJ) joined Indian American Muslim Council (IAMC) in condemning the use of a bulldozer at the India Independence Day parade this year in Edison, N.J.

The bulldozer, which has become a symbol of Muslim home demolitions in India, was decorated with the images of Indian Prime Minister Narendra Modi and Uttar Pradesh Chief Minister Yogi Adityanath, both of whom espouse Islamophobic Hindu nationalist ideologies and serve as active leaders of India’s ruling party, the Bharatiya Janata Party (BJP).

In June, CAIR’s national office called on the international community to act against the bulldozer demolition of Muslim homes by the Indian government.

In a statement, Indian American Muslim Council President Mohammed Jawad said:    “We need to contextualize what it means to march with bulldozers emblazoned with the images of two openly Hindu supremacist leaders.”

“Today in India, 200 million Muslims are at risk of mass violence from a radicalized majority population. Marching with these bulldozers shows support for forced homelessness and mass violence against a vulnerable minority,” added the statement.

CAIR-NJ Executive Director Selaedin Maksut said: “While we support Indian Americans’ right to celebrate their heritage and independence from British colonial rule, we condemn the use of a bulldozer and the glorification of Hindu nationalist figures who have a deeply anti-Muslim track record.” He added: “We also call on the mayors of Edison and Woodbridge townships, Sami Joshi and John E. McCormac respectively, and New Jersey Assembly Speaker Craig Coughlin, who joined the parade, to condemn these acts of hatred and block Hindu nationalists and the BJP’s attempts to interfere in local New Jersey politics.”